'Having a blast': No. 15 Cyclones thriving in trying times 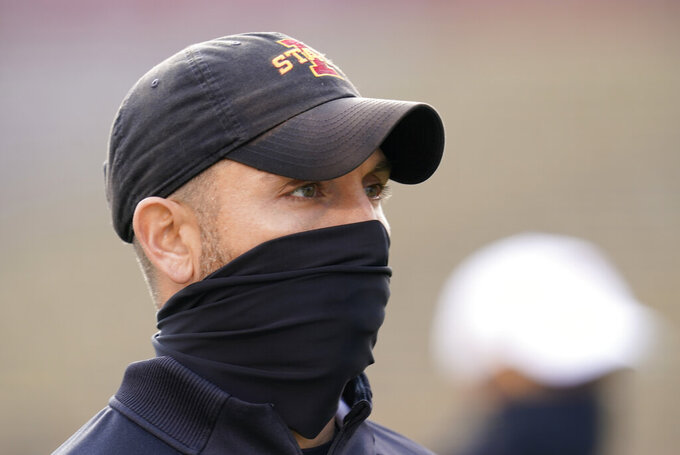 This would seem to be the kind of college football season that tests a player's love of the game.

Iowa State tight end Chase Allen, for one, doesn't see it that way.

“We’re having a blast this year,” he told reporters Tuesday. “I hope you guys are having as much watching us as we are playing because this is the most fun I’ve ever had in my life.”

But this isn't a normal year. The COVID-19 pandemic has created challenges for everybody everywhere. For college football players, spring practices were disrupted or not held at all, summer workouts were hit and miss, and preseason practices came with strict safety measures. And in August it still wasn't certain there would even be a season.

While virus outbreaks have shut down teams for days and led to the postponement or cancellation of games around the country, Iowa State has done a remarkable job avoiding COVID-19 and has not missed any games.

“This whole year was almost taken away from us,” Allen said. “This is nothing we have to do. This is something we get to do. That, mixed with the fact of what else would we be doing right now? It’s really a blast. We really don’t do a lot other than go to the facility and do our schoolwork.”

Coach Matt Campbell said he and his staff have not addressed the gravity of Friday's game. To do so, he said, would throw off the nose-to-the-grindstone mantra he's established in a program where recruiting strategy is not about star power but about finding players who fit in, show promise and hopefully exceed expectations.

Instead of talking about the stakes this week, Campbell continues with his one-play-at-a-time, one-game-at-a-time tact.

“I firmly believe that’s the only way you can become the best version of yourself, especially here where development and growth is truly the only way we can have success," Campbell said.

The Cyclones were in a similar situation the last time they went to Austin. In 2018, they had won five straight after a 1-3 start and would have taken a step toward the Big 12 championship game with a win. But star running back David Montgomery missed part of the game because of injury, quarterback Brock Purdy faced relentless pressure and the Cyclones lost 24-10.

That was Campbell's third year as coach, and players like Allen, Purdy and Charlie Kolar on offense and Mike Rose and Greg Eisworth on defense were freshmen or sophomores.

“At that time, we were babies,” Campbell said. “We were just evolving and everything was so brand new. There were such highs and lows throughout all those things, whether it was the next game or who you were playing. Now I feel like there’s a really good rhythm to the entirety of our program from day to day, game to game.”

Campbell said managing everything that has come with the pandemic has steeled his team, whether it was disruptions to daily training schedules since March, stringent testing and the players' collective determination to do what's necessary to avoid the virus.

“The biggest thing is at times we're kind of navigating uncharted water,” Campbell said. “When you're doing that, you kind of have very little ego, have the ability to self reflect across the board as players and coaches, and then try to navigate what's the best way to move forward.”