HBO revives 'In Treatment' with Uzo Aduba looking for truth 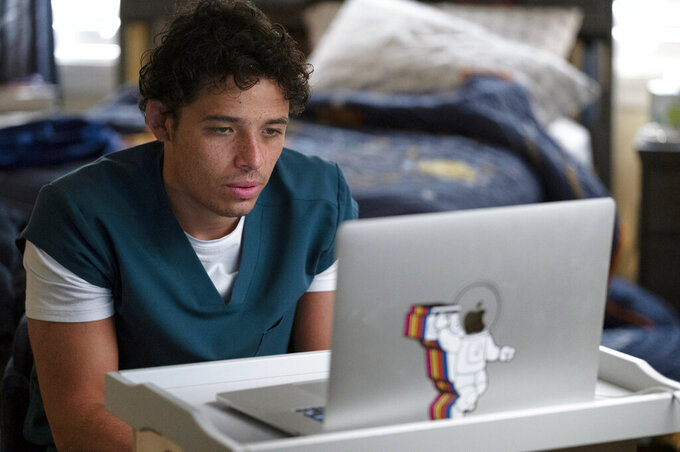 This image released by HBO shows Anthony Ramos in a scene from "In Treatment." (Suzanne Tenner/HBO via AP)

NEW YORK (AP) — Ten years after the drama “In Treatment” signed off, the HBO show is back with a group of new patients and a new therapist, but a similar theme: Physician heal thyself.

Uzo Aduba takes over from Gabriel Byrne as the psychotherapist at the center of the show, now playing buttoned-down Dr. Brooke Taylor with a thriving practice but a whole lot of personal demons.

“The safest that she seems to feel is when she’s in the room with her patients because that’s the way she can feel control," says Aduba. "When she leaves the room, you get to see just how out of control and how much avoidance plays a part in her everyday life.”

The show, which starts airing Sunday, has traded the previous episodes' Brooklyn brownstone for a chic and immaculate home in an affluent neighborhood in Los Angeles.

Shot during the pandemic, it leverages the times by incorporating social distancing and setting all the therapy sessions inside the home of Aduba's character.

“Even if a therapist has a home office, there’s usually division between their life and home life,” she said. “Because of pandemic, both the audience and her patients get an even larger view of who she really is, just by the mere fact that they enter her home.”

Ramos said he leapt at the chance of portraying a complex Latino character who embraces talk therapy. The actor, who said he’s personally benefited from therapy, hopes he can remove any stigma from seeking help.

“I remember I told someone in my family I was going to therapy and they were like, ‘Well, what’s wrong?’” he said. "I was like, ‘A lot. What do you mean what’s wrong? Life is hard.’”

Ramos’ character is quarantining with a wealthy family to look after one of their members. He and Aduba's doctor bond over their love of Gabriel García Márquez. He's having trouble sleeping, but she worries about prescribing medication. “This work — it’s not sexy, it’s not fast," she tells him.

Unlike the therapist's other patients, Ramos' character has his sessions on Zoom, a challenging prospect for both actors. Ramos and Aduba were in different rooms on set.

“I was afraid that it wouldn’t be as connective an experience, but it actually was in the end when we did it,” said Aduba. “I could see a world where teletherapy is now just a part of the therapeutic experience.”

Over time, the immaculate-looking, straight-arrow of Dr. Brooke Taylor slowly deflates as viewers learn she is wounded by loss — but hiding it.

“She’s excellent at her job, but we’re seeing a little bit of the fissures of her not being at her best in terms of keeping out the outside and not bringing so much of it inside,” said Aduba, who recently won her third Emmy in FX’s “Mrs. America.”

An interesting dynamic develops in which even as she guides her patients to their truths, they also dig into hers. Did she grow up in privilege? What about her romantic life?

“Her patients see her, too. You know what I mean?” she said. “They may not see the whole of her, but there are aspects of her life that they are also able to see and are not inaccurate.”

Filming started in November, and each episode took two days of work. The tough schedule and subject were lightened somewhat by occasional socially distanced dance parties in front of the actors' trailers during lunch breaks.

Ramos gave credit to Aduba for setting a professional and caring tone on the set. “It helps when you’re doing it with somebody like Uzo. She’s so beautiful in the way she articulates herself, in the way she treats the work,” he said. “When your lead actress is asking you what you need, that’s a gift.”

He said he hopes “In Treatment” can be more than just gripping weekly drama.

“Hopefully this show can give somebody the courage to take that small step to making a phone call to find somebody that they could talk to," he said. "I think it can help us all."