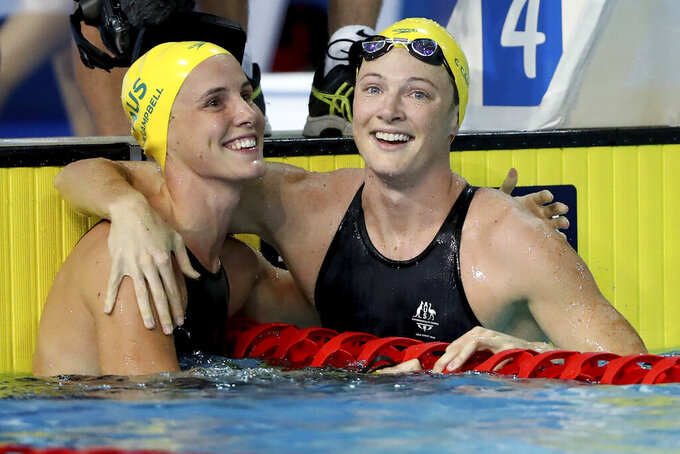 FILE - In this April 6, 2018, file photo, Australia's Cate Campbell, right, embraces her sister Bronte Campbell after their women's 50m freestyle semifinal at the Aquatic Centre during the 2018 Commonwealth Games on the Gold Coast, Australia. Even before the coronavirus pandemic, the Australian swimming siblings have had their share of health concerns. (AP Photo/Rick Rycroft, File)

Cate Campbell got “a huge wake-up call” when she went in for a routine checkup and discovered that she had skin cancer on her right arm.

Younger sister Bronte Campbell deals with so many aching muscles, bones and joints that she says “it feels like it’s every part of me.”

Even before the coronavirus pandemic, the Australian swimming siblings have had their share of health concerns.

None of that stopped them from qualifying for the Tokyo Olympics: Cate in the 50- and 100-meter freestyle and Bronte in two relays. Both are also slated to compete on a heavily favored Dolphins’ team aiming for a third straight gold in the 4x100 free relay — on the first day of swimming finals July 25.

Relays and medals quickly became an afterthought three years ago, though, when Cate was diagnosed with a Stage 1 melanoma.

“I just went in for a routine skin check and the dermatologist just didn’t really like the look of one of the moles, which had been on my arm my whole life and I hadn’t noticed any changes,” Cate said during a video interview with The Associated Press.

The mole had to be removed, as well as some surrounding tissue, leaving a nasty scar on her biceps.

“Fortunately that was it for me,” Cate said “Got all the cancer cells and I was in the clear. . . . If you can catch it early it’s very, very treatable — like myself. But if you leave it untreated, it can have some really serious consequences.”

“It could potentially save someone’s life,” she said. “Power of social media, right?”

Both Campbells are among Australia’s most well-known athletes, with each winning titles in the 100 free — swimming’s signature event — at back-to-back world championships: Cate in 2013 and Bronte in 2015.

Bronte improved on Cate’s performance by sweeping gold in the 50 and the 100 in Kazan, Russia, in 2015 after Cate combined silver in the 50 with her 100 victory in Barcelona two years earlier.

It seemed then that Bronte was on pace for the more successful career.

Then her body began falling apart.

“I’ve been injured for about five years now,” Bronte said during the joint interview, which was arranged by the sisters’ swimsuit sponsor, Arena. “It’s getting to a point where I’m pretty good at managing it now.

As for the injury details, Bronte says “it’s all pretty vague.”

“It was a neural thing with my neck and my shoulder on the left. I also have a bad right hip and my back on the left side I’ve got some inflamed joints as well. So it feels like it’s every part of me. ... I’m just holding together.”

“It takes almost as much time as my actual training does,” she said during an altitude camp at the Thredbo ski resort in Australia in May.

No wonder Bronte has said this will likely be her final Olympics — even though she’s only 27.

With the 2024 Paris Games only three years away, the 29-year-old Cate could keep going.

“It’s a really exciting time to be involved in swimming that there seems to be a bit more buzz being generated globally and a few new ventures,” she said, referring to the professional International Swimming League and the prospect of a domestic swim league being launched in Australia.

“I’ve also spoken to quite a few swimmers and they tell me that you’re a long time retired,” Cate added.

Both sisters share the same sentiment about going to Tokyo, where polls have showed that the majority of Japanese are against holding the games amid the pandemic and a slow vaccine rollout.

“I don’t want the games, which are my personal dreams, to be upsetting a whole lot of other people,” Bronte said. “So it does sort of take the shine off it a little bit, because you really want everyone to be on board with it, and for it to be a celebration of sport and a joyous affair. I understand where they’re coming from as a city and what they’ve been through for the last year. So I really empathize with them.”

In the future, both sisters would like to be involved in organizing the 2032 Olympics in Brisbane.

“There’s a pretty good like retirement runway being prepared for me with the 2032 Games,” Cate said. “Brisbane is our home city, so what more could you want really?”

Added Bronte, “I’m so jealous of 7-year-olds right now, because it’s going to be their games. … I would volunteer to stand outside and show people the way to the stadium. I just want to be there.”