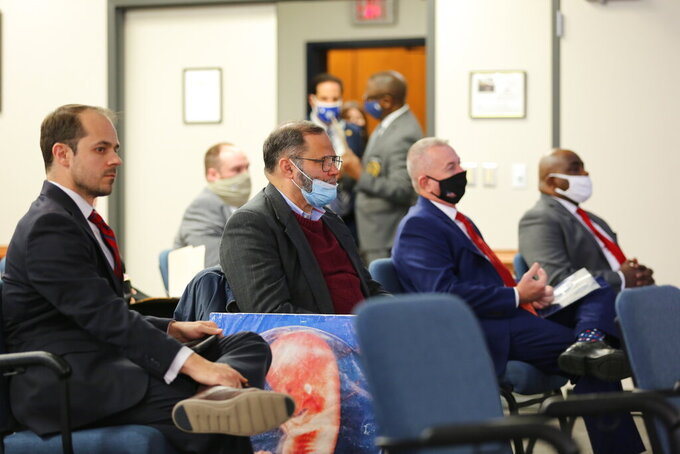 Supporters of a bill that would ban almost all abortions in South Carolina listen during a Senate subcommittee hearing on Jan. 14, 2021, in Columbia, S.C. The heartbeat abortion bill has stalled in recent years, but appears to have a good chance of passing in 2021.(AP Photo/Jeffrey Collins)

COLUMBIA, S.C. (AP) — South Carolina lawmakers are again considering a bill that would ban most abortions in the state and it seems much more likely to pass this time thanks to conservative gains in the General Assembly and at the U.S. Supreme Court.

The ban on abortions once a fetal heartbeat can be detected, usually around six weeks after conception, have passed in several other states, but can't be enforced because of court challenges.

For years, the “South Carolina Fetal Heartbeat and Protection from Abortion Act ” or similar proposals have made it through the House and all the way to the full Senate. But backers could not get two-thirds of senators to agree to overcome a procedural hurdle and vote on the ban. Some supporters of the bill were also hesitant to pass it because of the risk and expense of having it thrown out by the courts.

Two things changed in late 2020. Republicans picked up three Senate seats from Democrats and boosted their majority to 30 of the chamber's 46 seats. And there was the death of Justice Ruth Bader Ginsburg, a reliable U.S. Supreme Court vote against stricter abortion bans. She was replaced by Amy Coney Barrett, widely expected to be a conservative abortion opponent when she rules.

Firmly in the Bible Belt, South Carolina was at the forefront of stricter abortion laws before the turn of the century. But lately, conservatives have been frustrated as nearly a dozen other states — including neighboring Georgia, nearby Tennessee and further off Missouri — passed the stricter bans. The laws are all tied up in courts

“I can’t believe we are still having this conversation," said Chris Smith, the state coordinator for the National Day of Prayer. “We’ve been at this a while. It’s time to get it passed.”

One sign of the greater likelihood of passage this year was the small group of senators holding a public hearing on the proposal Thursday, just the third day of the session. Usually the House passes the proposal first by a wide margin before it stalls in the other chamber. The bill was identified as "S-1" for this session, another symbolic gesture. Gov. Henry McMaster said again in Wednesday's State of the State address he would sign it immediately if it passes.

The bill's opponents said it would virtually outlaw all abortions by making them illegal, usually around six weeks after conception. They said most women don’t realize they are pregnant before a heartbeat is detected. They also questioned why the Senate Medical Affairs Committee decided to take up abortion instead of COVID-19, which has killed more than 5,400 people in the state.

Not all roadblocks have been removed. The bill does have exceptions if the life of the mother is at risk, but currently no exceptions for pregnancies caused by rape or incest.

Republican Subcommittee Chairman Tom Davis said it would have to have the rape exception and include guaranteed health care for pregnant woman, allow birth control without a monthly prescription and extra support for adoption and foster care for him to support it at the end.

"We have to focus on their well-being after they are born,” the Beaufort Republican said.

Davis did join with two other Republicans to advance the proposal on a 3-2 vote.

Similar bills have passed in recent years in Louisiana, Georgia, Kentucky, Mississippi and Ohio. Missouri approved a ban on abortions after eight weeks of pregnancy and Alabama lawmakers simply outlawed all abortions. All of them remain tied up in courts.

Officials said 101 people signed up to speak at Thursday's hearing. Davis gave them all three minutes while suggesting minds would not be changed.

“It is a bill upon which individual have voiced their opinion both for and against extensively," Davis said.

Before even an hour passed, Democratic lawmakers appeared tired of the stream of pastors and religious groups calling for the ban.

“Help us with useful information. The political speeches and pastors preaching a sermon — I’ve got a pastor," said state Sen. Marlon Kimpson, D-Charleston. “Quite frankly, I'm more interested today in hearing from the doctors and people with medical expertise.”

Sen. Richard Cash, who was elected to the Senate in 2017 in great part for his zealous push to ban all abortions, said everyone who wished to speak should be heard.

“The citizens have come to speak. I believe they have a right to their three minutes.," the Republican from Anderson County said. "If they want to speak as a pastor, a homemaker any other person of our society, they are welcome.”