Heat to open vaccinated-only sections for fans on April 1 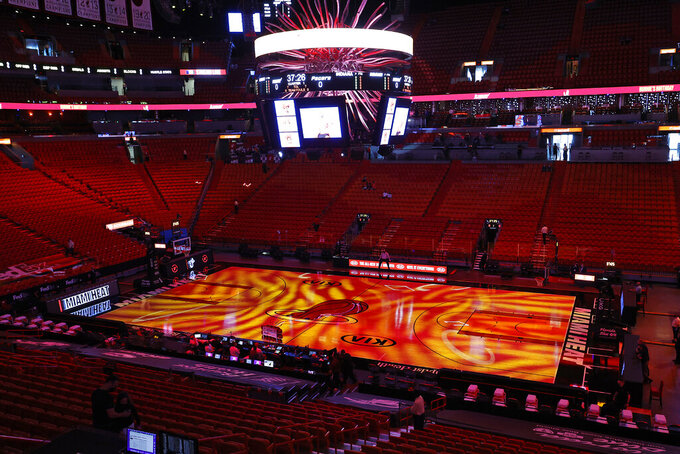 A general view of the American Airlines Arena prior to the start of an NBA basketball game between the Indiana Pacers and the Miami Heat, Sunday, March 21, 2021, in Miami. (AP Photo/Joel Auerbach)

MIAMI (AP) — Vaccinated fans will soon have their own sections at Miami Heat games.

The Heat announced plans Tuesday to open two sections in their lower bowl only for fully vaccinated fans starting with an April 1 game against Golden State. They are the first NBA team to reveal such a plan, though other clubs are believed to be working on similar measures.

Masks will still be required, even for the vaccinated fans, but social distancing rules will be slightly relaxed in those areas.

The NBA told teams last week that such sections would be allowed, under very specific conditions and in accordance with local and state health and safety guidelines. If any of the sections provided by teams include seats within 30 feet of the court, fans in those seats will have to take a PCR test two days prior to the game or an approved antigen test on game day.

“You’re already getting a sense that things are starting to change and go in a much more positive direction,” Heat coach Erik Spoelstra said. “Just the environment in our building, I remember those first couple games we had at the beginning of the year when there was literally nobody here, that was an eerie experience.”

The Heat are devoting two sections for the fully vaccinated fans, where pods of groups will be separated by just one seat. Those fans will be admitted through a separate gate and required to show their Centers for Disease Control vaccination card, or proof thereof, along with valid identification. Fans would have to have been fully vaccinated for at least 14 days to be eligible to be in those sections.

Miami has allowed a small number of fans to attend games for the past several weeks, plus has had virus-detecting dogs at entrances this season. The Heat are also one of four teams — New Orleans, Atlanta and Portland are the others, with Blazers coach Terry Stotts saying Tuesday that 13 players have received the first dose — to publicly acknowledge in recent days that some players and staff members have started the vaccination process.

“Things are moving,” Spoelstra said. “All of us can’t wait until we get our building full again, and same thing for other arenas.”

By NBA rules for the vaccinated-only sections, children not yet eligible to receive the vaccine would not be permitted even if with parents or guardians who have been vaccinated. Teams are also being encouraged to have dedicated concession and restroom areas for the vaccinated fans, and make efforts to limit any chance for those fans to commingle with others inside the arena.