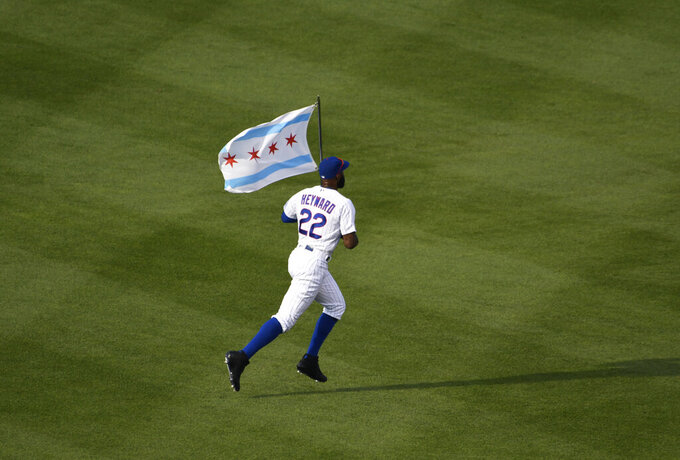 CHICAGO (AP) — Kyle Hendricks finished a three-hitter after new manager David Ross gave him one more batter, Anthony Rizzo homered and dished out hand sanitizer, and the Chicago Cubs started the season by beating the Milwaukee Brewers 3-0 on Friday night.

Ian Happ connected for a two-run drive and Ross got his first victory in his debut as a big league skipper, making all the right moves in front of a mostly empty Wrigley Field for the opener of a pandemic-shortened 60-game season.

Showing off an improved curveball, Hendricks struck out nine and walked none in his first career opening-day start and fourth career shutout.

“That was fun to watch,” Ross said. “I mean now you know why he’s a guy that you slot into the opening-day starter role.”

Orlando Arcia had each of Milwaukee's hits off Hendricks (1-0). After he singled with two out in the third for the Brewers' first baserunner, he accepted a splash of sanitizer from a smiling Rizzo at first and cleaned off his hands.

“It surprised me, too," Arcia said through an interpreter. “I wasn’t prepared. I didn’t think he was going to do that.”

Rizzo said he got the idea while hanging out with some friends.

“We were all talking about it and all just started to laugh," Rizzo said. "Kind of forgot about it and then the other day I remember it.”

Ross came out to check on Hendricks with two out and a runner on first in the ninth. He told the right-hander he had one more hitter, and Keston Hiura bounced into a game-ending fielder's choice on Hendricks' 103rd pitch.

It was the first complete game for a Cubs pitcher on opening day since Bill Bonham beat the Phillies 2-0 on April 9, 1974.

“Just being back out there with the guys, it was so much fun,” Hendricks said. “Playing for something, you definitely felt the energy in the dugout was way different for us.”

One of Chicago's elevated train lines rumbled in the distance as the NL Central rivals renewed acquaintances three months after they were scheduled to begin the season at Miller Park. Normally, the sound of the Red Line is drowned out by 30,000-plus fans, but there was only a handful of people at Wrigley because of the coronavirus pandemic — making for a handful of unusual scenes.

Cubs left-hander Jon Lester watched the start of the game from the bleachers in left field. Brewers slugger Ryan Braun, who is normally greeted by vociferous boos when he comes to Chicago, played in relative silence all night long.

Even with the stands empty, Jason Heyward carried a Chicago flag when he ran out to right field for the start of the game.

Milwaukee right-hander Brandon Woodruff allowed four hits in five innings in his first career opening-day start. Woodruff (0-1), who made the All-Star team last year for the first time, struck out five and walked one.

“That was a good sign for me, give up the big hit and then I was able to go out there and execute some pitches through those couple innings, and I felt fine to go out for another but my pitch count was up,” Woodruff said. "I just need to take the positives from tonight and move on.”

Woodruff's only rough patch occurred in the third, when Nico Hoerner singled with one out and Happ followed with a deep drive to center. Happ also homered on opening day in 2018.

Rizzo connected in the eighth against J.P. Feyereisen, sending a shot over the wall in right against the Wisconsin native in his major league debut.

Brewers: Braun (back) got the start as the designated hitter and went 0 for 3. Counsell said Braun went through a full workout Thursday. “I think he needed to feel good after yesterday and he reported feeling better than he did the day before,” Counsell said. "That’s a good sign.”

Cubs: Rizzo was in the starting lineup after dealing with back trouble during summer camp. ... Kris Bryant got the start at third after he was scratched from Wednesday's exhibition game against Minnesota due to back stiffness.

Corbin Burnes and Yu Darvish take the mound when the series resumes Saturday afternoon. Burnes is making his fifth career start after spending much of his first two seasons in Milwaukee's bullpen. Darvish finished strong last year, posting a 2.76 ERA over his final 13 starts with Chicago.