Herman returning in 2021 for 5th season with Texas Longhorns 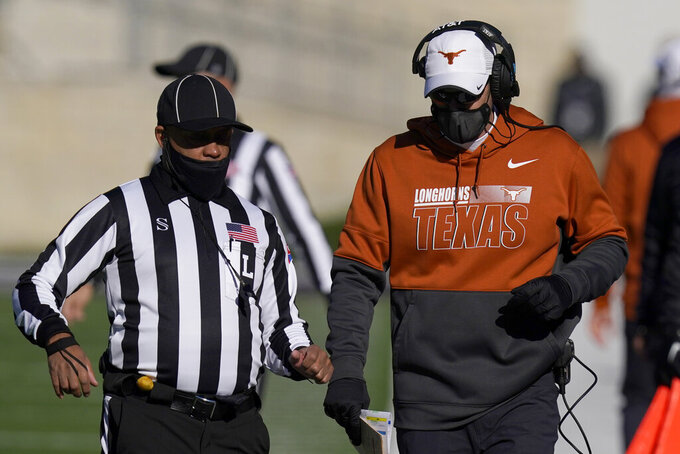 Texas has ended widespread speculation about coach Tom Herman’s future, announcing Saturday he will return in 2021 for his fifth season with the No. 23 Longhorns.

“My policy is to wait until the end of the season before evaluating and commenting on our program and coaches. With the close of the regular season, I want to reiterate that Tom Herman is our coach," athletic director Chris Del Conte said in a statement released by the school just four days before the early signing period for high school recruits begins.

Eyes around college football have been on Texas for weeks. There were rumors and speculation about the Longhorns trying to gauge former Ohio State and Florida coach Urban Meyer's interest in coming to Austin, but nothing came of it.

Without a slam dunk replacement lined up — and with Texas on the hook for upward of $20 million in contracts between Herman and his staff — the school decided to stay the course.

“When I look at our football program right now, I see tremendous young men and promising talent,” said Del Conte, who was hired after Herman in 2017. “Our student-athletes are developing, and they play their hearts out. This has been an unprecedented year for all of us, and we're all disappointed that we didn't meet our expectations. Like the many fans that follow and support our program, I can't help but think what could have been in 2020. There's still more work to be done, but I'm excited to watch our players and our program move forward.”

While Herman has never had a losing season with the Longhorns, they have made only one appearance in the Big 12 title game during his tenure and now have gone 11 seasons since their last conference championship in 2009.

Herman has three seasons remaining on a guaranteed contract that is due to pay him more than $6 million per year. The 45-year-old coach is 31-18 at Texas, including a 1-4 record against arch-rival Oklahoma, and is 53-22 overall including his two seasons as head coach at Houston.

Texas is 6-3 this season after its scheduled regular-season finale Saturday at winless Kansas was canceled for the second time because of COVID-19 issues.

Herman’s best season was 2018, the only time the Longhorns made the Big 12 title game in his tenure. They finished that season with a dominating win over Georgia in the Sugar Bowl that prompted quarterback Sam Ehlinger’s now-infamous “We’re ba-aack!” statement to a national television audience.

Texas gave Herman a two-year contract extension after that season.

The Longhorns instead sunk back to the middle of the pack in the Big 12. The Longhorns reached as high as No. 8 early in the pandemic-impacted 2020 season before quickly fading. They were effectively eliminated from the Big 12 title game with a 23-20 home loss to Iowa State with two games left to play.

There have also been ominous signs for the future for Texas, too. Several of the state’s top recruits have either pulled back from early commitments to the Longhorns or have already announced plans to head elsewhere. Most notable among the decommits was Dallas-area quarterback Quinn Ewers, considered the top recruit in the 2022 class.

Still, Texas will run it back with Herman and head into 2021 with even more pressure on the coach to have the Longhorns playing more like the elite programs in the country.