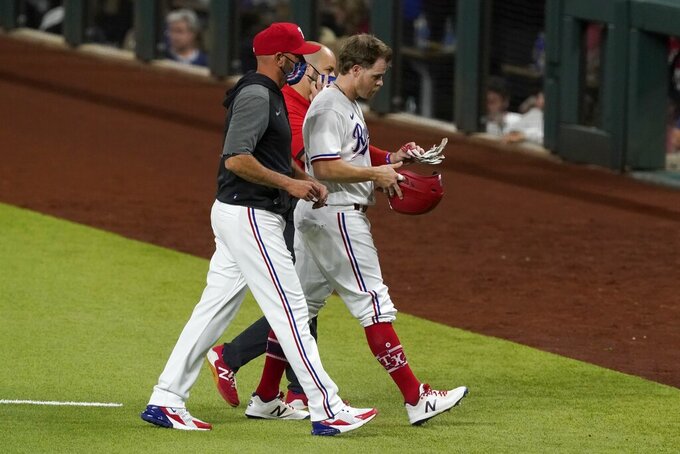 Texas Rangers manager Chris Woodward, left, and a member of the team's staff, rear, escort Brock Holt, right, off the field after Holt hit a single that scored Nick Solak during the eighth inning of the team's baseball game against the Toronto Blue Jays in Arlington, Texas, Tuesday, April 6, 2021. Holt left the game with an unknown injury. (AP Photo/Tony Gutierrez)

ST. PETERSBURG, Fla. (AP) — Texas Rangers right-hander Jonathan Hernandez had ligament reconstruction surgery on his right elbow Monday, just less than two weeks after fellow reliever José Leclerc had the same procedure, and their bullpen will also be without hard-throwing Matt Bush until at least July.

Rangers president of baseball operations Jon Daniels said the Tommy John surgery on Hernandez was performed by team physician Dr. Keith Meister and went as expected. Both Hernandez and Leclerc will be sidelined until at least early in the 2022 season. Meister did Leclerc's surgery on March 31.

Bush has a flexor strain in his right arm and will get an injection Tuesday, then wait six weeks before a follow-up MRI to determine if the right-hander is ready to start throwing again. Daniels said Bush would then need about six weeks — or about the same length of time he is unable to throw — before being able to pitch again in a game.

After missing 2 1/2 seasons because of a pair of elbow operations, Bush was put on the 10-day injured list Friday with elbow inflammation after three appearances.

The 24-year-old Hernandez had a breakout 2020, when he was 5-1 with a 2.90 ERA in 27 appearances in the pandemic-shortened 60-game season. He had 31 strikeouts and eight walks in 31 innings, relying heavily on a sinker that averaged nearly 98 mph. He was shut down midway through spring training with what the team called a ligament sprain, and he decided to have the Tommy John surgery after a follow-up MRI last week.

“(The MRI) showed some measure of healing. But he was he was still feeling some discomfort in the joint, which after four weeks, medical staff felt like if it was likely to heal non-surgically, then he wouldn’t have felt discomfort at that point,” Daniels said. “Ultimately Jonathan’s call. The decision was made rather than to invest more time in the rehab side, since he was still having symptoms, to go ahead and have the surgery.”

— Right-handed reliever Joely Rodriguez, slowed in spring training because of a left ankle injury during the offseason, is at the team's alternate site in Round Rock, Texas, and will start throwing in games this week.

— Third baseman Brock Holt resumed baseball activity Monday, six days after straining his right hamstring in a game. Daniels said the team is optimistic that Holt will be ready when eligible to come off the injured list on Saturday.

— Outfielder-designated hitter Willie Calhoun (left groin strain) had been in games at their spring training site in Arizona, but now has gone to Round Rock, where he will start playing games this week after completing COVID-19 intake testing.

“He’s continuing the baseball side of it," Daniels said. “He’s healthy at this point."

— Outfielder-designated hitter Khris Davis (left quad strain) is still about two weeks before being a full-go medically and able to compete in games to prepare for his Rangers debut.

— Left fielder David Dahl was back in the lineup for the series opener at Tampa Bay, as the designated hitter, after missing the finale of the Padres series with calf tightness.