High court justice, who authored end to execution, to retire 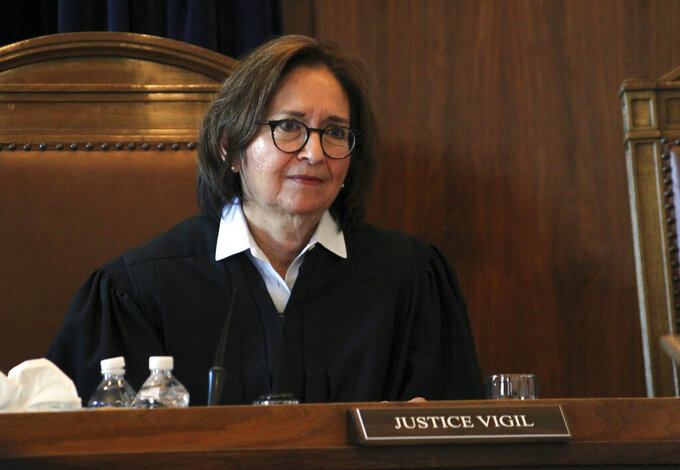 SANTA FE, N.M. (AP) — State Supreme Court Justice Barbara Vigil is retiring from the New Mexico Supreme Court at the end of June after more than eight years at the high court.

Vigil wrote the lead majority opinion in 2019 that set aside the death penalty for the final two inmates awaiting execution a decade after the state repealed capital punishment. She also authored recent opinions on utility regulation amid the state’s transition away from coal-fired power plants.

With Vigil on the bench, the Democrat-dominated court has largely turned away challenges to the governor's emergency powers to restrict public gatherings and business operations during the coronavirus pandemic.

Announcing her departure, Vigil gave thanks to advocates involved in reforming and modernizing the judiciary.

“Equally rewarding has been the opportunity to work with countless professionals and volunteers to bring forth initiatives designed to improve our system of justice,” said Vigil, who joined the court in 2012 with an election victory of Justice Paul Kennedy, a Republican appointed by then-Gov. Susana Martinez.

Court administrators noted Vigil's recent work in providing alternatives to juvenile detention and lobbying at the Legislature to improve legal representation for children and parents in abuse and neglect cases.

Vigil was high school valedictorian at St. Catherine’s Indian School in Santa Fe and is a graduate of the University of New Mexico law school. She owned and operated her own law office for years before becoming a district court judge in 2000.

Serving in the Santa Fe-based First Judicial District, she presided over 16,000 cases ranging from civil litigation to child abuse cases and administrative appeals.

The retirement triggers a vetting process for replacement candidates by a bipartisan nominating commission. Nominations are delivered to Gov. Michelle Lujan Grisham to make an appointment.

Vigil's successor must stand for partisan election in 2022. The winner of that election will confront a retention vote in 2024.