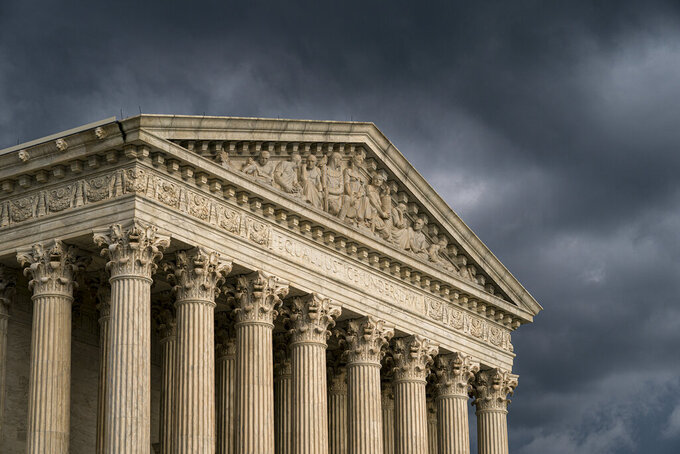 FILE - In this June 20, 2019, file photo, the Supreme Court is seen in Washington as a storm rolls in. The Supreme Court seems inclined to say that hundreds of millions of dollars in coronavirus relief money tied up by a court case should benefit Alaska Natives, rather than be spread more broadly among Native American tribes.The justices were hearing arguments April 19, 2021, in a case involving the massive pandemic relief package passed last year and signed into law by then-President Donald Trump. (AP Photo/J. Scott Applewhite, File)

WASHINGTON (AP) — The Supreme Court seemed inclined Monday to say that hundreds of millions of dollars in coronavirus relief money tied up in court should benefit Alaska Natives rather than be spread more broadly among Native American tribes around the U.S.

The justices heard arguments in a case involving the massive pandemic relief package passed last year and signed into law by then-President Donald Trump. The $2.2 trillion legislation earmarked $8 billion for “Tribal governments” to cover expenses related to the pandemic.

The question for the court is whether Alaska Native corporations, which are for-profit companies that provide benefits and social services to more than 100,000 Alaska Natives, count as “Indian tribes."

The federal government set aside more than $530 million for the corporations, but the funds have been tied up as a result of lawsuits by Native American tribes. If the tribes win, the disputed funds would be distributed among 574 federally recognized tribes both in and outside Alaska.

The case is important not only because of the amount of money it involves but also because Native Americans and Alaska Natives have been disproportionately affected by the pandemic.

On Monday, the justices agreed that Congress could have chosen clearer language in the Coronavirus Aid, Relief, and Economic Security Act to describe who should get money. But both conservative and liberal justices also seemed to conclude that Congress intended Alaska Native corporations to get funds.

During about an hour and a half of arguments the justices heard by phone because of the pandemic, Justice Samuel Alito suggested it would be “absurd” for the law to be read as not covering the so-called ANCs. And Justices Clarence Thomas and Justice Neil Gorsuch suggested Congress could have chosen other language if it intended to exclude them.

Justice Elena Kagan called it “implausible” that Congress intended to leave ANCs out. And Justice Stephen Breyer seemed ready to excuse Congress' grammar and conclude they should be covered.

Part of the issue for the justices is that Alaska is unique. Unlike in the lower 48 states, Alaska Native tribes aren’t situated on reservations. Instead, Native land is owned by Alaska Native corporations created under a 1971 law. The for-profit corporations run oil, gas, mining and other enterprises. Alaska Natives own shares in the corporations, and the corporations provide a range of services from healthcare and elder care to educational support and housing assistance.

Arguing for the federal government, Matthew Guarnieri told the justices that the “settled understanding for the last 45 years has been that ANCs are eligible to be treated as Indian tribes.” Doing differently would be a “dramatic departure from the status quo,” he said. A lower court's decision in favor of the Native American tribes “threatens to shut ANCs out of a wide range of important federal programs," he said.

Guarnieri acknowledged the language Congress used could have been clearer: “I’m not going to sit here and say that this is the best possible way to draft a statute,” Guarnieri said. Kagan replied: “Well, I think we can all agree on that.”

After the CARES Act was passed, three groups of tribes sued to prevent payments to ANCs. They argue that under the language of the law, only federally recognized tribes qualify for the aid and ANCs do not because they are not sovereign governments as tribes are. A trial court ultimately disagreed, but a unanimous panel of the District of Columbia Circuit reversed the decision.

Both the Trump and Biden administrations agreed that the CARES Act makes the corporations eligible for the relief money. A decision in the case is expected by the end of June, when the court traditionally begins its summer break.

Felicia Fonseca contributed to this report from Flagstaff, Arizona.