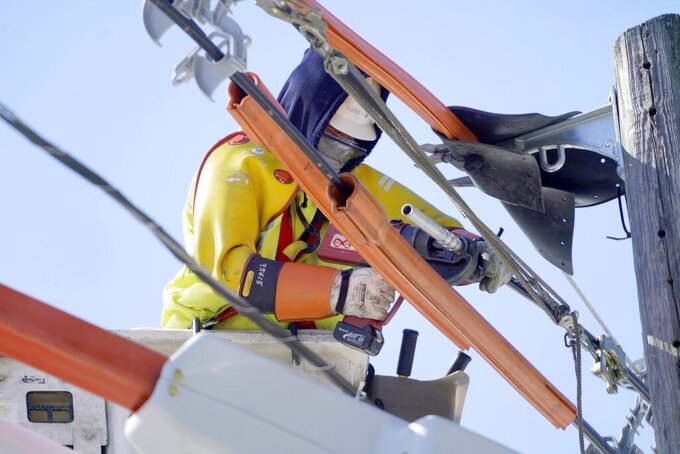 A lineman from National Grid repairs a main line damaged from a fallen white pine on Hubbard Street in Lenox, Mass., on Tuesday, March 2, 2021. High winds knocked out power for thousands in the Berkshires. (Ben Garver/The Berkshire Eagle via AP)

NEW YORK (AP) — More than 130,000 homes and businesses were without power across New England and New York on Tuesday as winds reaching 70 mph or more knocked down power lines across the region.

The gusts were accompanied by single digit temperatures in parts of New England, creating dangerous conditions for those without heat.

On Monday evening, blackouts were affecting 30,000 customers across Massachusetts, including in Boston. High winds toppled scaffolding at the site of a seven-story building under construction late Monday night.

Authorities said no one was injured by the scaffolding collapse.

“Because it was night and it was cold, people were not anywhere near it,” Fire Department District Chief Pat Nichols said. “It’s very fortunate that nobody was hurt.”

The wind howled through the night across the region, shaking windows and whipping trees. Higher elevations saw the strongest gusts, and New Hampshire’s Mount Washington recorded a gust of 131 mph (210 kph), according to the National Weather Service.

By daybreak, some of the worst of the storm damage was in Maine, where more than 30,000 customers were without power with temperatures in the single digits and strong winds making it feel even colder.

The wind was also hampering the restoration of power in Maine.

“We are responding to outages as quickly as we can. However, we cannot send our field crews up to the power lines in buckets when wind gusts are dangerously high,” said Kerri Therriault, director of electric operations for Central Maine Power.

In New Hampshire, damage from the wind forced the closure of both a COVID-19 testing site and a vaccination site, interfering with appointments.

“Our staff is still assessing the damage, but the main tent was destroyed overnight," Jake Leon, a spokesperson for the state Department of Health and Human Services, said of the vaccination site at Southern New Hampshire University. People with appointments were notified by phone and email that the vaccination site was moved to Concord, he said.

Fallen wires in Connecticut forced police to close more than a dozen roads, including streets in Windsor, Wethersfield, Farmington and Burlington. More than 17,000 customers were without power Tuesday morning in the state.

In New York, more than 26,000 customers were without power Tuesday morning. Ulster County in the Hudson Valley was hardest hit, with more than 11,000 households and businesses affected.

A wind advisory was in effect from Monday night until 4 p.m. Tuesday in New York City, where the winds forced ferry operators to suspend service from at least one Brooklyn pier.

The good news was that both the gusts and cold temperatures were expected to be short-lived, with winds calming and temperatures warming by Tuesday, said meteorologist Maura Casey in Maine.