Higher-risk NFL coaches not punting on season of COVID 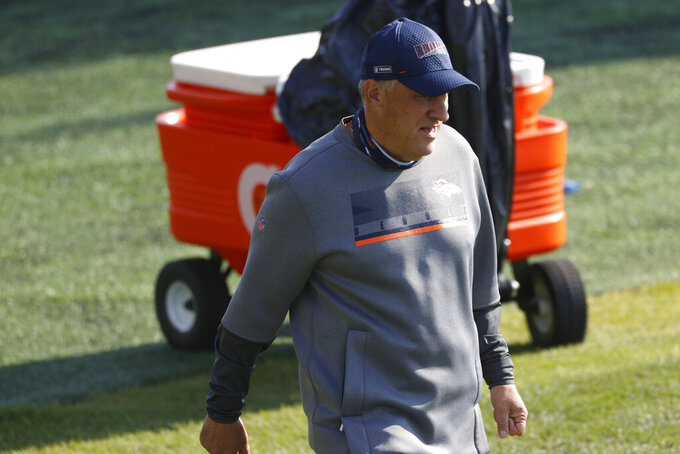 Danny Smith will turn 67 in the middle of this pandemic-altered NFL season, an age that has put Pittsburgh's special teams coordinator at higher risk for harm from the coronavirus.

Taking a precautionary sabbatical this year, however, would not have suited Smith well.

“It never entered my mind. Man, I don’t do anything but coach football. I don’t have any hobbies,” Smith said this week. “I’ve been called a lot of names in this business, but a ‘house cat’ has never been one of them, and I’m not one to sit at home and do nothing.”

Courage and perseverance have forever been part of the ethos of the sport, occasionally to a bull-headed fault. Still, 67 players across the league exercised their collectively bargained right to opt out of the 2020 season for health reasons.

To date, no member of any team's coaching staff has announced an intent to sit out. Most coaches in the league are at least two decades older than the players they're directing, even with the recent hiring trend toward younger, offense-minded head coaches. The gap between the eldest of coaches and the youngest of players reaches the 50-year range.

For many of the game's most seasoned teachers, coaching football is all they've ever wanted to do.

“There’s no way I’d opt out,” said 64-year-old Vikings head coach Mike Zimmer, adding: “Us coaches that are in these high risk areas, we kind of understand how safe it really is in this building. Where we have to be careful is when we step outside the building. I’ve talked to the coaches about a lot of these things as well. I think we love to do what we do so much that this is important to us.”

Said Dallas defensive coordinator Mike Nolan, who is 61: “I never even thought about opting out myself. That was a player option, but I never saw it as a coach option.”

Per the Centers for Disease Control and Prevention, the risk of severe illness from COVID-19 increases with age. In baseball, the Minnesota Twins decided to hold two assistant coaches — 68-year-old Bob McClure and 66-year-old Bill Evers — out of the ballpark this season out of concern for their health and gave them temporary reassignments until the pandemic passes.

Two other major league assistant coaches, Ty Van Burkleo (Cleveland) and Willie McGee (St. Louis), each made their own choice to stay home. McGee did so after 18 members of the organization, including 10 players, were diagnosed with confirmed coronavirus cases.

Some underlying medical conditions can also increase the risk. The stress of the job has led to more than a few health scares for NFL head coaches over the years. Zimmer's current offensive coordinator, Gary Kubiak, had to resign as Denver's head coach due to health problems. Tampa Bay head coach Bruce Arians has endured three forms of cancer. Just this week, Washington head coach Ron Rivera announced he's been diagnosed with a treatable form of skin cancer.

“I’m very comfortable with our protocols now that I’ve gotten used to the protocols,” said Arians, who is 67. "We had a week of staff meetings where we went through the protocols, how to teach with a mask on and all of the things that we are going to do differently. I’m very, very comfortable with it. As far as on the field, I’ll maintain a mask and probably a shield just for personal use, and coach like I’ve always coached.”

Among primary coordinators, 14 of them across the league are already 60-plus. That doesn't include the 73-year-old Romeo Crennel, who is Houston's associate head coach.

In the time of COVID, increased health risk has not been the only extra burden on the eldest members of the league's coaching fraternity. The offseason was all-virtual, of course, and some of the virus-proofing protocols have added an additional layer of technology for a generation that first picked up their clipboards and whistles when game film was just that and the term zoom was reserved for a blitz call or a maybe a pass route.

“I’ve learned a lot,” Smith said, “and I’m going to give credit to our IT people here at the Pittsburgh Steelers. When you can teach me and get me up and running with some of the IT situations we were put in this year ... they are a special group. I appreciate them and can’t thank them enough.”