Historic heart of Los Angeles on life support from COVID-19 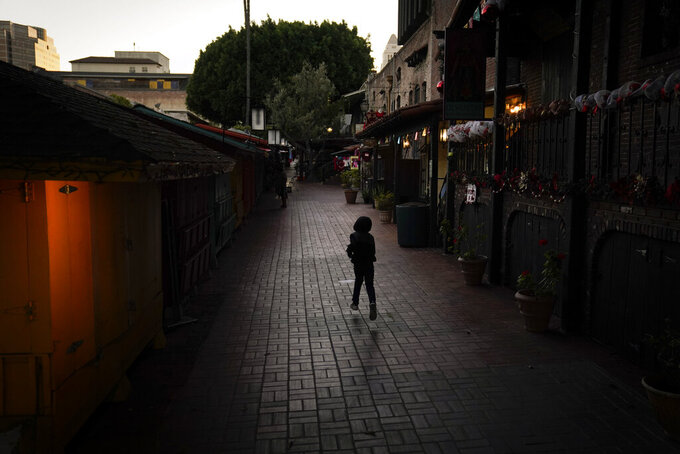 A boy chases a bird on an empty Olvera Street in downtown Los Angeles, Tuesday, Dec. 15, 2020. The tree-covered brick alley typically teeming with tourists is empty. Many of the shops that sell everything from traditional Mexican folk dresses to paintings of artist Frida Kahlo to sombreros are padlocked and the ones open have few, if any, customers. The strains of mariachi trios have fallen silent and the fragrance of taquitos frying has become less pungent. (AP Photo/Jae C. Hong)

LOS ANGELES (AP) — For nine nights culminating on Christmas Eve, the oldest street in Los Angeles typically comes alive with a festive re-enactment of the nativity story, as children playing Mary and Joseph go door to door seeking shelter where she can give birth to Jesus.

If the procession were held this year, they would find many of the businesses on Olvera Street shuttered.

The Mexican market, known as the birthplace of Los Angeles, has been particularly hard hit by the coronavirus pandemic, with shops and restaurants closed and others barely hanging on. California is enduring by far its worst outbreak of the coronavirus, and Los Angeles is among the locations seeing the greatest spike.

“It’s pretty grim right now,” said Edward Flores, owner of Juanita’s Café, where under the state's health order meals can only be served to-go and business is down 90%. “I know of six (businesses) that have gone belly up. These are my neighbors and my friends. To see them fail through no fault of their own is heartbreaking.”

EDITOR’S NOTE — Small businesses around the world are fighting for survival amid the economic fallout from the coronavirus pandemic. Whether they make it will affect not just local economies but the fabric of communities. Associated Press journalists tell their stories in the series “Small Business Struggles.”

On Olvera Street, the tree-covered brick alley typically teeming with tourists is empty. Many of the shops that sell everything from traditional Mexican folk dresses to paintings of artist Frida Kahlo to sombreros are padlocked and the ones open have few, if any, customers. The strains of mariachi trios have fallen silent and the fragrance of taquitos frying has become less pungent.

The response to COVID-19 in California — various degrees of shutdowns and shifting rules limiting capacity and how food can be served — has been crippling for many businesses. But the impact on Olvera Street is somewhat unique.

The shops and eateries rely heavily on tourism that has collapsed worldwide under lockdown orders, quarantine rules or the reality that many people don't want to risk exposure during travel.

They also count on a lunch crowd driven by downtown office workers and people attending proceedings in nearby courthouses. Those customers have evaporated with so many people now working from home and many legal proceedings held online or by phone.

The cultural events held year-round that draw large crowds were called off this year to prevent mass outbreaks. There was no blessing of the animals in April, no Cinco de Mayo, no Dia de los Muertos in the fall and no Las Posadas celebration marking the journey to Bethlehem for the birth of Jesus.

The street, named for the county's first judge, is the thriving center of the El Pueblo de Los Angeles Historical Monument, near where the city’s original settlers established a farming community in 1781. It became dilapidated in the early 20th century until it was restored and re-envisioned as a marketplace in 1930 and has become a kind of living history museum.

More than 2 million people typically visit the site that is open every day of the year and home to four museums, two churches and more than 70 shops and restaurants.

Valerie Hanley, treasurer of the Olvera Street Merchants Association Foundation and a shop owner, said only about a fifth of the shops are now open during the week and about two-thirds open Friday through Sunday trying to scrape by.

“We’re sucking air,” said Hanley who runs Casa California with her 83-year-old mother. “The little bit we make ... it’s enough to put food on the table and keep her insurance and pay a few of the bills.”

Owners got a break in July when their landlord — the city of Los Angeles — decided to forgive rent through the end of the year. Hanley now worries how many businesses will be able to hang on when rents come due in January after they just received county property tax bills they’re responsible for paying.

Many of the owners are third- and fourth-generation and Hanley said ties to the past would be lost if they go out of business.

When Debbie Briano's great-grandmother established El Rancho Grande as a restaurant in 1930, there was no electricity. She cooked meat on charcoal at home and the market was lit by oil lanterns. Briano's father, from whom she inherited the business when he died, spent his whole life on the street and as a boy would pull a red wagon with cooked beans from his grandmother's house to the restaurant, she said.

“It’s amazing when I hear all this stuff and I think, ‘I can’t let this go,’” Briano said. “My dad left this to me because he knew I would take care of this business.”

Even as the December light casts long shadows over the market, Briano is not giving up. She's serving takeout food and is paying five employees — including brothers who have worked there 55 years and 48 years each — but not herself.

It's sad to see shops closed and the emptiness feels like she's entered an episode of “The Twilight Zone,” she said. Canceling the Las Posadas celebration means no children swinging at a pinata each night or carolers singing as they follow the procession of angels and shepherds leading Mary and Joseph on their journey from Nazareth.

But Briano still decorated her cafe like she normally would at Christmas. She bought poinsettias, put up a real tree, hung tinsel, lights, and strung little snowmen and Santa Claus above her window.

“I had to do that to feel normal," she said. "I’ m not going to let COVID take away our Christmas magic.”