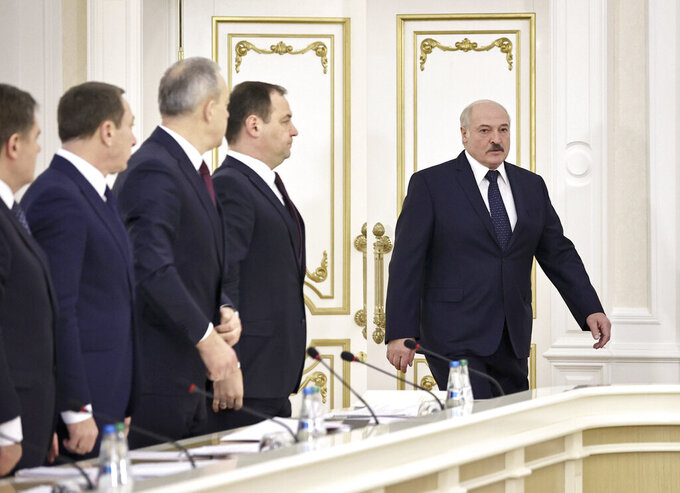 Belarusian President Alexander Lukashenko attends a meeting on the work of the economy in the current year in Minsk, Belarus, Monday, Dec. 7, 2020. (Maxim Guchek/BelTA Pool Photo via AP)

GENEVA (AP) — Under pressure to remove Belarus as co-host of next year's men’s world championship, the International Ice Hockey Federation said Tuesday a working trip to Minsk was canceled because its top two officials have become infected with COVID-19.

The authoritarian leader of Belarus was suspended by the IOC on Monday from Olympic activities, including the Tokyo Games, during an investigation into athletes’ claims they have faced reprisals for protesting against his disputed re-election.

The Belarus Olympic Committee, led by Lukashenko since the 1990s, seemed to have violated the Olympic Charter principle protecting against discrimination in sport, IOC president Thomas Bach said Monday at a news conference.

“We need to go to court," Lukashenko said Tuesday. “Let Bach and his group say what I’m guilty of in defending my country.”

Lukashenko's comments could refer to an appeal at the Court of Arbitration for Sport.

The hockey world championship, which Belarus previously hosted in 2014, has personal importance for Lukashenko. He has described the sport as “an ideology” in Belarus, and has skated with Russian President Vladimir Putin.

The IIHF is among Olympic stakeholders urged to respect the IOC decision, which included breaking off talks with Belarus about hosting events and meetings.

In a statement Tuesday, Fasel referred only to “safety issues that are affecting preparations” for the 2021 hockey worlds, which are set to open in May in Belarus and Latvia.

The Latvian government called on the Zurich-based IIHF in August to move games from Minsk after Lukashenko’s win in August over opponent Sviatlana Tsikhanouskaya. She and her supporters say the vote was riddled with fraud.

However, Fasel said the planned meeting with Lukashenko was to explore “what steps are being taken to ensure that the tournament can be held safely and in cooperation with co-hosts Latvia.”

The 70-year-old Fasel, a long-time IOC member, said he and Lichtner “are both in isolation at home for the next 10 days” and no rescheduled date to travel to Belarus was given.

An online meeting of IIHF national members on Friday was postponed.

The head of the Belarusian hockey federation, Dmitry Baskov, was also suspended by the IOC executive board.

“Our athletes are victims of repressions because they speak against violence and state terror,” Tsikhanouskaya wrote on her Twitter account.

The Belarus Olympic committee said the IOC “may have been subject to political pressure” in acting against its leaders.

“The position of the IOC is considered by us to be prejudicial," the national Olympic body said, “based on a biased and superficial assessment of the situation in the Republic of Belarus.”