Homa missing out on Masters and return to Quail Hollow 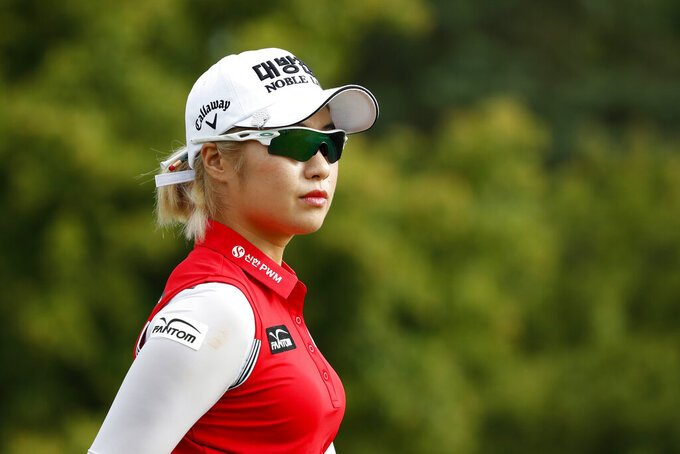 FILE - In this June 20, 2019, file photo, Jeongeun Lee6, of South Korea, walks off the 10th tee during the first round of the KPMG Women's PGA Championship golf tournament in Chaska, Minn. Lee has committed to play the Korean LPGA Championship in two weeks, according to Yonhap News Agency. (AP Photo/Charlie Neibergall, File)

Missing the Masters was hard enough for Max Homa, who was a month away from making his debut at Augusta National.

What really stung was missing the tournament that made him eligible for the Masters.

Homa won his first PGA Tour event a year ago this week at the Wells Fargo Championship, starting the back nine with a pair of birdies to build a big lead and closing with a 4-under 67 for a three-shot victory. Quail Hollow Club in Charlotte, North Carolina, is one of his favorites, and that was before he won.

When he returned a few months ago to help promote the tournament, he was given his own locker in a special room for tournament champions that include Tiger Woods, Rory McIlroy, Jason Day and Jim Furyk.

“That’s something I wasn’t expecting,” Homa said. “Quail Hollow holds a special place in my heart. They care so much about everyone who comes through there.”

Homa at least gets to carry the title as defending champion for two years. But getting back to Quail Hollow? That could last a little longer. The tournament next year moves to the TPC Potomac in Maryland because Quail Hollow is hosting the Presidents Cup later in the year.

And at least the Masters is still on the schedule for this year, two weeks before Thanksgiving.

Homa said he was starting to get excited for Augusta National as it got closer. And then it was time to shut it down because of the coronavirus pandemic. But it was Wednesday of what would have been Masters week that he missed it again.

Instead, he spent the week watching reruns.

But he hasn’t lost sight of why no golf is being played.

“It’s hard to get caught up about your sad feelings about not playing the Masters when people would do quite a bit to just to be able to go back to work, or to be healthy,” Homa said. “So it’s hard to be down for too long.”

U.S. Women's Open champion Jeongeun Lee6 could be ready to get back to golf.

With exhibitions in the works involving Tiger Woods and Phil Mickelson, and a charity event for caddies at a private club in Texas, the Korean LPGA Tour is planning to resume in two weeks with the KLPGA Championship.

Yonhap News Agency reports that Lee6 and Sei Young Kim, whose birdie putt on the final hole gave her the $1.5 million prize in the LPGA Tour's season-ending event, have signed up for the May 14-17 tournament at Lakewood Golf Course.

The KLPGA began its season in Vietnam in December, but that was the last event because of the new coronavirus that shut down sports worldwide. The KLPGA Championship, one of five majors on the circuit, was originally to be held this week.

Lee6 won six times over two years on the Korean LPGA until coming to America, were she won the U.S. Women's Open at Country Club of Charleston and was the LPGA rookies of the year.

Kim is a 10-time winner on the LPGA Tour.

The LPGA Tour played four events until its Asian swing was postponed because of the coronavirus, and then 11 more tournaments domestically were canceled, postponed or rescheduled. The next event would be in Arkansas on June 19-21.

Yonhap said Sung Hyun Park and Hyo Joo Kim, who both started on the KLPGA and went on to win majors, are contemplating playing the KLPGA Championship. Park has yet to play this year.

The report said Jin Young Ko, the No. 1 player in women's golf, and seven-time major champion Inbee Park, decided not to play because they felt they would be taking a spot from players who have struggled financially during the pandemic.

Young, super talented, explosive and a winner for the first time on the PGA Tour at the Wells Fargo Championship. That would be Rory McIlroy in 2010.

Kim was 22 when he registered a five-shot victory at Quail Hollow, and surely greatness would follow. He played in his first Ryder Cup that summer and was so intense in his singles match against Sergio Garcia that Kim stormed toward the 15th tee as Garcia stayed on the 14th green to shake hands. Kim didn't realize he had won the match.

Kim played in the Presidents Cup the following year, and Robert Allenby told the media that Kim had stayed out all night on the streets of San Francisco — this after Kim had beaten him, 5 and 3.

But he hurt his hand after winning the Houston Open in 2010. Two years later, he shot 74 in the first round at Quail Hollow, walked straight to his car, dumped his clubs in the trunk and never played another round on tour.

A college student in Boston was working on a profile on Anthony Kim late last year, and after a series of questions, she asked if there was anyone in golf who resembled Kim.

The season ended the second week in March because of the COVID-19 pandemic.

The presentation of the Ben Hogan Award moved in 2002 to Colonial Country Club in Fort Worth, Texas.

The winner will be announced in June — Colonial is scheduled to be the first event June 11-14 when the PGA Tour hopes to resume — but the dinner will not be held. The winner will get an invitation to play the Charles Schwab Challenge at Colonial next year.

The Northeast Amateur in Rhode Island, one of the premier amateur events in the country, has been canceled for the first time in its 58-year history because of the coronavirus pandemic. It had been scheduled for June 24-27 at Wannamoisett Country Club. Past champions include Dustin Johnson, David Duval and Ben Crenshaw. ... Brooks Koepka enlisted his girlfriend to cut his hair, and it didn't turn out very well. “The only good thing is I've got my mustache still,” he said.

“Is it built for TV? Because I don't think it will be a good TV product.” — Rory McIlroy on a PGA Tour event without fans.