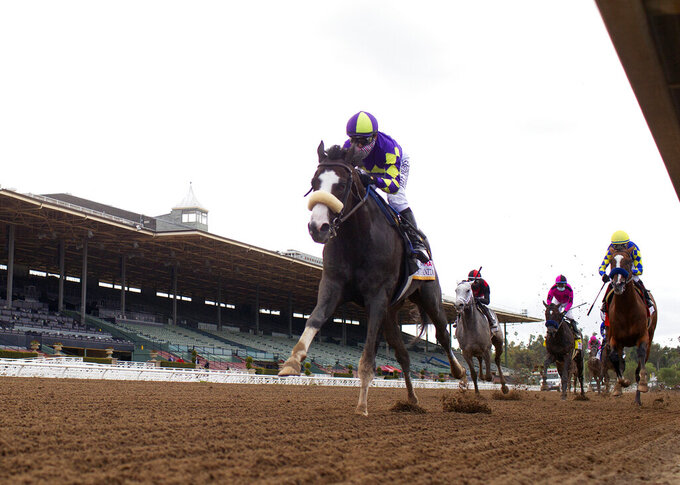 Ridden by Hall of Famer Mike Smith, Honor A. P. ran 1 1/8 miles in 1:48.97 and paid $6.40, $2.60 and $2.20. It was Smith's third straight win and fourth overall in the West Coast's major prep for the Kentucky Derby. The Grade 1 race was run without spectators or media at Santa Anita because of the coronavirus pandemic.

"I miss the fans, but I just got to pump myself up," Smith said.

Trained by John Shirreffs, who oversaw superstar Zenyatta, Honor A.P. was purchased for $850,000 as a yearling. He is a ridgling, a male horse in which one or both testicles do not descend.

“We knew that he has tactical speed and Mike can put him pretty much where he wants,'' Shirreffs said. ”On the backside, we hoped he would get comfortable and to have a nice kick in the end, and it all worked out well.”

Honor A. P. earned 100 qualifying points for the Kentucky Derby, which has been rescheduled to Sept. 5 because of COVID-19. That moved him into second with 120, two points behind leader Tiz the Law, on the Derby leaderboard which determines the 20-horse field for the race.

"It’s up to him whether we run him again before the big dance,” Shirreffs said. “We have to see how the horse comes out and how he feels, but you’d always prefer to run. Running is probably the best option rather than training up to it, but we’ll wait and see how it all happens.”

Unbeaten in three previous starts, Authentic broke outwards leaving the gate but was less than a length off the lead from his outside post position heading into the first turn. From there, he pressed the pace while three-deep, was in a good position while second at the top of the lane, but couldn't catch Honor A. P.

“I got the consolation prize,” joked Baffert, who won his fourth Gold Cup after losing the Santa Anita Derby earlier. “This horse has been training so well. Drayden had him in the perfect spot and he had plenty left for the run home. This horse is only going to get better.”