Hovland has an even-par score, uneven day with rulings 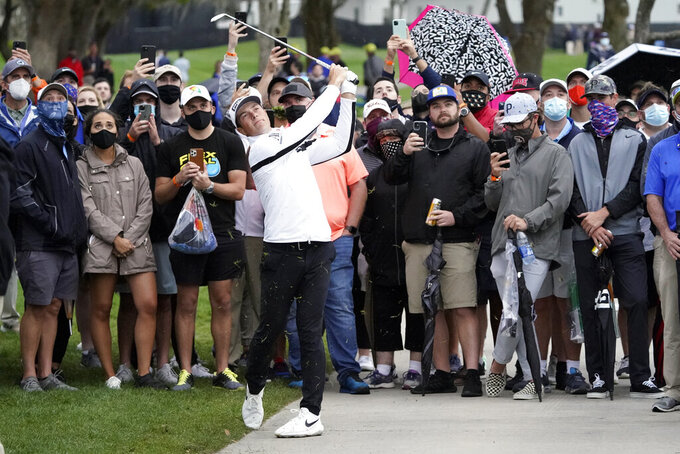 Viktor Hovland, of Norway, hits a shot from the cart path off the 16th fairway during the third round of the Arnold Palmer Invitational golf tournament Saturday, March 6, 2021, in Orlando, Fla. (AP Photo/John Raoux)

PONTE VEDRA BEACH, Fla. (AP) — Viktor Hovland made a pair of double bogeys Thursday in The Players Championship, both involving the rules, neither of which was cut-and-dried.

Hovland hit into the water with his second shot on the par-5 11th that he saw land in the grass and bounce to the right into the hazard. He wanted to be sure, but it's such a small area, he decided to call in the rules official.

They looked at video, most likely the camera behind the green, and footage appeared to show it hit the wood plank before going into the water. The wood is beyond the hazard line.

“I was 100% confident it did not hit the wood, but in that situation, you have to be 100% certain, and when he said that video footage was not 100% decisive, then I didn't really have much more of a say,” Hovland said.

He was prepared to drop behind the water, instead of next to where the ball bounced into the water, when a crew from PGA Tour Live confirmed it landed in the grass before the water. He was able to drop 50 yards from the hole.

“It didn't really help me out because I ended up hitting it over the green,” Hovland said.

The other double bogey was a result of his own memory, and honesty.

He had chipped up to 4 feet on the 15th hole, marked his ball and then moved the marker a putter length away to get out of the line of Justin Thomas. When he returned the mark, Hovland measured the putter length the wrong direction — even further away from his original spot.

Only after the round did he realize his mistake and notified rules officials. He was docked a two-shot penalty for playing from the wrong spot, turning his 70 into a 72.

Sergio Garcia heads to the Masters next week starting another streak that won't be nearly as long. He had played in 84 consecutive majors dating to the 1999 British Open when he missed the Masters after testing positive for the coronavirus.

It was a reminder for Garcia to be limit risks, and it makes his a little edgy to have fans around.

“I'm not too much of a record kind of guy, but it was nice to have that streak going,” he said. “I think I was quite close to catching up with Tom Watson as second most all time.”

“If I had to miss any Masters, that probably was the one,” Garcia said. “Obviously playing in November, the Masters is unbelievable, but it didn’t have the feel that it has in April, for sure.”

As for the fans, Garcia tested positive right after the Houston Open, which had limited fans. He was at the Workday Championship, which allowed members. The Players and Dell Match Play have limited fans.

“I would love to get closer to the fans, but there’s too much at risk, at stake for us,” he said. “And if we get COVID because of anything, we’re the one that pays. We pay the price. No one else does. So we have to be very careful as the fans come back into our game — which is great to have them, don’t get me wrong.”

WOODLAND ON THE MEND

Gary Woodland opened with a 70 and felt good doing it. That was more important to him than the score.

The former U.S. Open champion has been struggling with a torn labrum in his hip, which ultimately led to other problems as he tried to play through it. Now he's on a training regimen that has him feeling pain-free.

His one regret was playing last year when golf returned from the pandemic.

Woodland is trying to avoid surgery because he said the recovery would be six months. He's had cortisone injections and doesn't want any more.

“Hopefully, I can avoid it with the way I'm training,” he said.

SO MUCH FOR THE HOME GAME

Lanto Griffin figures he has played the Stadium Course some 50 times in the last year, mostly during the shutdown from COVID-19 and then again through the holidays. He lives in the area and plays often with Vijay Singh.

That wasn't much of a help Thursday in his first official round of The Players Championship, where he opened with a 71. It's the same course. He's just never seen it like this.

“The course is the best I've seen it,” Griffin said. “I think it's actually a disadvantage playing here, seeing the greens rolling at 7 (on the Stimpmeter) and ripping it back. You get here and the greens are 4 feet fast. It's not a disadvantage. But we're so used to how it usually is. And then they turn it on.”

Griffin said he was aware of how much faster the greens were during practice rounds. Even so, it was difficult to trust the speed and he often ran it well past the hole.

“I made enough 5- and 6-footers to have a chance tomorrow,” he said.

The good news? He has never made worse than birdie on the par-3 17th. He hit it to 6 feet on Thursday, thanks in part of caddie Andy Sanders noticing how firm the green was bouncing. He also made birdie last year in a round that isn't official because the tournament was canceled.