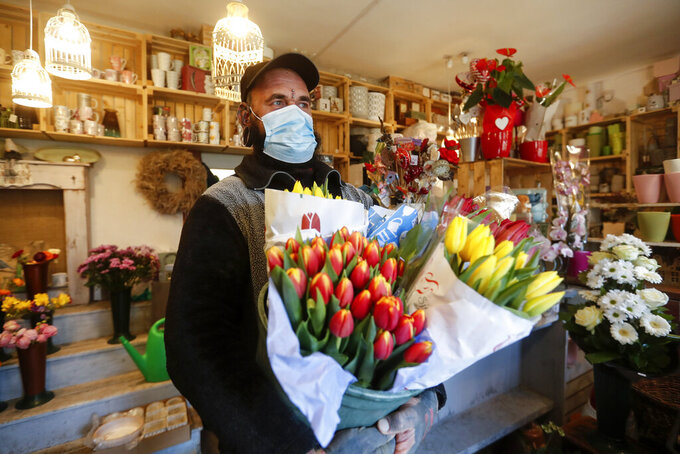 A staff member of a flower shop holds tulips in Budapest, Hungary, Wednesday April 7, 2021. Hungary's government lifted several lockdown restrictions on Wednesday, even as some doctors and medical experts urged caution after a record-breaking day of COVID-19 deaths, a move that came as Hungary reached 2.5 million first-dose vaccinations, a benchmark the government set for when a gradual reopening could move forward. (AP Photo/Laszlo Balogh)

Businesses that had been closed since early March reopened their doors, with limits on customer numbers, after Prime Minister Viktor Orban announced the lifting of the lockdown measures late Tuesday.

The move came as Hungary reached 2.5 million first-dose vaccinations — a benchmark the government set for when a gradual reopening could move forward — but coincided with a new high of 311 deaths on Wednesday and a record number of fatalities last week.

“Today, we reached an important milestone,” Orban said in a Facebook video Tuesday. “The virus waged a war against us, and the only weapon that promises victory is the vaccine.”

In addition to the reopening, shopping hours have been extended from 7 p.m. to 9:30 p.m. and the overnight curfew in place since November now starts two hours later, at 10 p.m.

Restaurants and bars will remain limited to take-out and delivery service, and hotels must remain closed.

Hungary's government — which faces elections next year and is aiming to remedy a 5.1% economic contraction in 2020 — has for weeks communicated that its successful vaccination program would soon allow for a swift reopening of the economy.

Hungary has vaccinated more than a quarter of its nearly 10 million population and has the second-highest vaccination rate in the European Union, the result of a procurement strategy that sought jabs from China and Russia in addition to those received through the EU.

But the rapid spread of the British variant of the coronavirus in recent weeks has given the country one of the worst infection rates in Europe and the third-highest death rate per 1 million inhabitants in the world, leading some doctors to urge restraint in what they see as a premature restart.

Janos Szlavik, head doctor at the South Pest Central Hospital, told public media on Monday that the 2.5 million inoculations so far could “somewhat change the course of the coronavirus pandemic,” but that Hungary was far from achieving herd immunity that could put an end to the spread.

“We have to give many, many more vaccinations before we can relax,” Szlavik said.

In a statement to The Associated Press, the board of directors of the Hungarian Chamber of Doctors said that it “continues to consider improvement in pandemic data and a reduction of the burden on the (healthcare) system to be the conditions for the reopening that everyone is waiting for.”

Despite fears that the reopening could lead to a “fourth wave” even as the current surge continues to peak, some business owners welcomed the move.

“The closure was very bad and hopeless, but opening is really great. It was very sudden and unexpected ... but we were very glad,” said Andrea Roder, a hairdresser in downtown Budapest, the capital.

Bernadett Kovacs, who owns a flower shop in a suburb of Budapest, told the AP that she had followed the progress of vaccinations and was prepared to stock new inventory when Orban made his sudden announcement Tuesday.

“It's definitely a pleasure to open, and it feels good to finally not have this uncertainty. We can stop playing the role of a delivery service and finally sell with open doors,” Kovacs said.