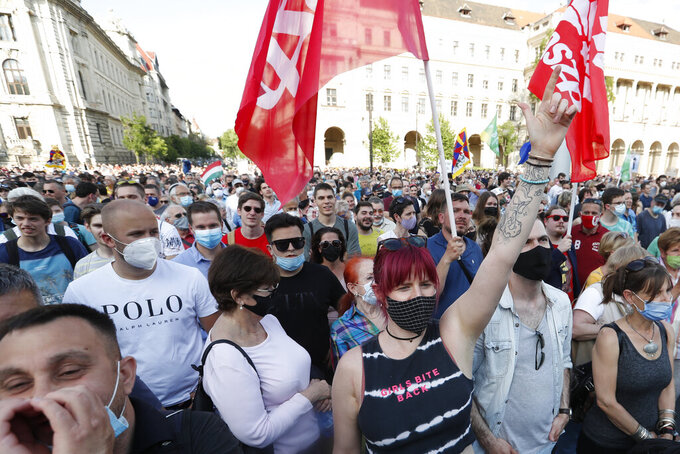 A strategic agreement that Hungary signed with Shanghai-based Fudan University envisages opening a branch in the city’s 9th district. Plans call for the Budapest campus to be completed by 2024. It would enroll international students and represent the school’s only foreign outpost, as well as the first Chinese university campus in the 27-nation European Union.

The protesters marched from Heroes’ Square toward the Hungarian parliament building, defying a pandemic ban on gatherings of more than 500 people. The crowd carried banners reading 'No Fudan," flags and posters.

Budapest authorities have opposed the university branch idea. They argue the $1.9 billion project would place a huge burden on taxpayers and send the wrong political message because of the alleged human rights abuses in China.

Budapest Mayor Gergely Karácsony had a huge photo of a protester facing a tank in Beijing's Tiananmen Square projected behind him during Saturday's demonstration. Chinese troops opened fire on protesters in the square on June 4, 1989, killing hundreds and perhaps thousands.

“What we want is the student city," Karácsony added. "What we don’t want is the 500 billion forint ( 1.45 billion euro; $ 1.6 billion) Chinese elite university paid from the taxpayers’ money. It is as simple as that.”

Orban, a right-wing populist, has fostered closer ties with Russia and China as he faces European Union criticism for his authoritarian ways and staunch anti-immigration stand.

Hungarian officials have insisted that Fudan, ranked among the top 100 universities in the world, will help raise higher education standards in Hungary. But the university's links to China's Communist Party have sparked outrage among liberal-minded Hungarians.