Hurricane forces move of LSU-Missouri game out of Louisiana 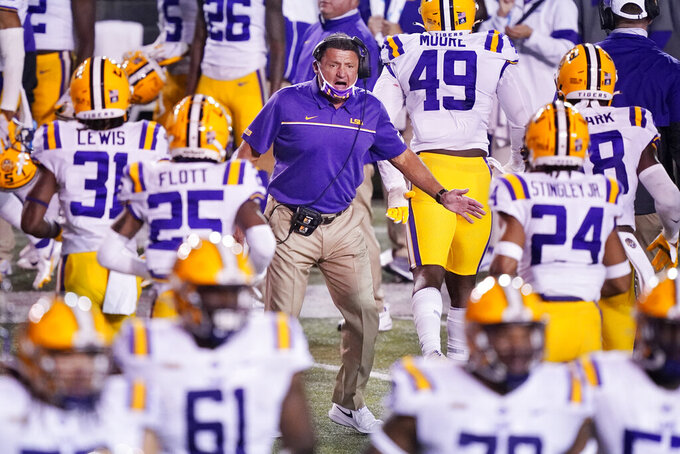 BIRMINGHAM, Ala. (AP) — No. 17 LSU will travel to Missouri's home stadium for a late-morning kickoff on Saturday instead of hosting the game at night as originally scheduled because of Hurricane Delta's expected landfall in or near Louisiana later this week.

The Southeastern Conference announced the move on Wednesday. SEC Commissioner Greg Sankey said in a statement that moving the game was in the best interest of safety for Louisiana.

The game will be played at 11 a.m. CDT in Columbia, Missouri, after being previously scheduled for Saturday night in Baton Rouge, Louisiana.

The conference is monitoring the hurricane’s path and communicating with schools about its potential impact on other sports.

“It was critical to relocate the game to an SEC campus where SEC COVID-19 management protocols are in place and readily applied,” Sankey said in the statement. “I appreciate the cooperation of the schools who are working closely to make the appropriate operational adjustments in order to prioritize the health and safety of our student-athletes while accommodating this change in the schedule.”

LSU coach Ed Orgeron said his team's training schedule will remain the same through Thursday afternoon. He was unsure whether the team would fly to Missouri on Thursday night or Friday morning. But he said LSU has secured the use of a convention center in Columbia for a walk-through practice on Friday.

Orgeron said he also was grateful for the early kickoff because it will be easier to recover for the following weekend's game at Florida than if this weekend's game had been at night.

“We play the 11 o’clock game, we’re going to be back in Baton Rouge around 6 or 7 o’clock," Orgeron said. "I think our team and our coaches will get more rest. I think that’s a big advantage for us.”

LSU is accustomed to having games delayed, moved or even canceled because of weather events.

Hurricane Katrina forced LSU's slated 2005 home opener against Arizona State to be moved to Tempe, Arizona. LSU won that game in what was then-coach Les Miles' debut for the Tigers.

When LSU finally was able to play its first home game of 2005 against Tennessee, it was delayed from Saturday to Monday night by Hurricane Rita, and Tennessee won in overtime.

In 2015, LSU had an early-season home game against McNeese State canceled by persistent lightning, but later that season wound up hosting an additional SEC game because of deadly flooding in South Carolina. The Gamecocks, which were supposed to host that game, traveled to Baton Rouge instead and LSU won 45-24 in what turned out to be coach Steve Spurrier's final game before his mid-season resignation.

In 2016, Hurricane Matthew caused a contentious postponement of LSU's originally scheduled October visit to Florida. The SEC wound up brokering a rescheduled game in November at LSU that caused both teams to cancel previously scheduled home games against nonconference opponents.

Then-LSU athletic director Joe Alleva argued it was unfair to make the Tigers end the season with three consecutive SEC road games, so the Florida game was moved to Baton Rouge on the condition that LSU would visit the Gators the next two years.

Florida wound up winning the 2016 game, which propelled the Gators to that season's SEC championship game.