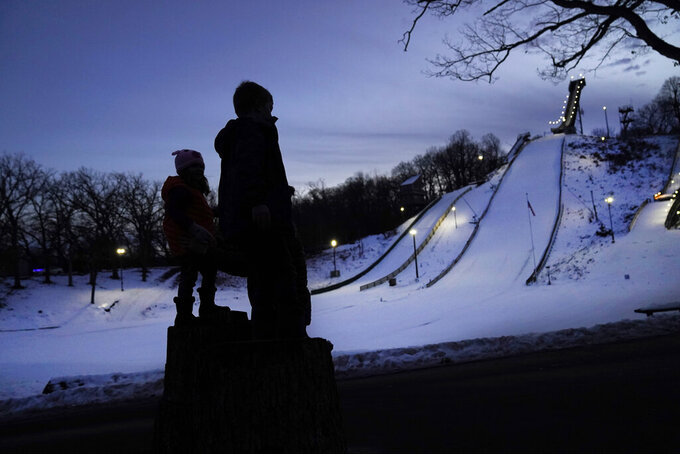 Julia Lindquist, 4, left, and Miles Stanton, 7, stand in silhouette on tree stumps and look over the five ski jump runs at the Norge Ski Club Tuesday, Jan. 18, 2022, in Fox River Grove, Ill. Lindquist was drawn to the sport when her parents would drive around the area for something safe to do during the COVID-19 pandemic last year. Each time the family of four drove near the club last year, the little girl in the back of the car told her parents of her hopes and dreams. "She didn't stop saying she wanted to do it," said her father, Jake. "I want to jump. It still hasn't let up."(AP Photo/Charles Rex Arbogast)

FOX RIVER GROVE, Ill. (AP) — Julia Lindquist sat on a bench and patiently waited for her turn at ski jumping practice, all decked out in a red, white and blue jumpsuit with stars on her tiny torso and bars across her arms.

With the fearlessness befitting a 4-year-old, she shuffled her skis to the top of the 5-meter hill (16.4 feet) and nudged herself down the run. She led with her helmet and leaned over her skis as she threw her hands back, caught a little air and made a smooth landing.

Coached by a volunteer with Norwegian roots and a hat to match his heritage, Lindquist is one of dozens of girls and boys whose after-school activity is ski jumping a couple days a week at the Norge Ski Club about 40 miles northwest of Chicago.

It's not far-fetched to suggest one of the young jumpers may land in the Olympics someday.

While this low-lying lake country may not seem like a ski jumping hotbed, there is a hill created by a glacier that has been a home for the sport since 1905. Over the next month, three men who trained at the club will represent the United States at the Winter Olympics.

The 25-year-old Bickner and the 23-year-old Larson grew up practicing and competing in Fox River Grove, where a five-hill jumping complex pops up out of nowhere. Like other kids, they started off on smaller hills and worked their way up to a 70-meter hill ((230 feet) that gives Olympic hopefuls a chance to live their dreams.

“I had a crew of probably about 10 kids that kind of grew up with me, started with me," Larson said in Lake Placid, New York, sitting on a deck at the Olympic Jumping Complex. “And by the time we were on hills this size, only about three or four of us were left.

“Now at my home club, I see 40 kids walking around and hear stories, `Not enough equipment. We gotta share.' That’s a really good problem to have at the end of the day because because that just means there’s too many kids."

There are some 30 ski jumping clubs in 12 states, spanning from Alaska to New Hampshire, that are part of USA Nordic competition. The clubs are a big deal in their communities, but ski jumping is a niche sport for Americans, who have a slew of sports to choose from to participate in and watch, with limited access points.

USA Nordic executive director Billy Demong said there are about 1,000 boys and girls paying to be part of a ski jumping program and regularly attending practice, roughly tripling the total from a decade ago.

“COVID just boosted everything because people were looking for stuff to do with their kids,” Demong said.

The interest is welcome and the doors are open for everyone. In much of the U.S., the young ski jumpers largely look the same because most of them are white.

“It is a predominately European sport and it has historically been mostly Caucasians, but we see a tremendous opportunity to increase diversity in our sport,” said Demong, a five-time Olympian in Nordic combined. “In Anchorage, Alaska, we have a diverse group of young jumpers and there’s potential in Minneapolis and Chicago.”

Only one American ski jumper has won an Olympic medal, and that happened almost a century ago. Anders Haugen left t he first Winter Olympics in 1924 without any hardware but 50 years later was awarded a bronze medal after a scoring error was confirmed.

As much as Julia Lindquist looked like a miniature superhero on a recent Tuesday night at the start of practice, two hours later she no longer had the jumpsuit, boot and skis on as she looked and sounded like a typical 4-year-old kid as bedtime approached

“I want my mommy," she said in tears, clutching her dad's hand.

Yet she was right back out there for a weekend tournament.

Lindquist was drawn to the sport when her parents would drive around the Fox River Grove area for something safe to do during the pandemic last year. Each time the family of four drove near Norge Ski Club, the little girl told her parents of her hopes and dreams.

“She didn’t stop saying she wanted to do it,” said her father, Jake Lindquist. “‘I want to jump.’ It still hasn’t let up.”