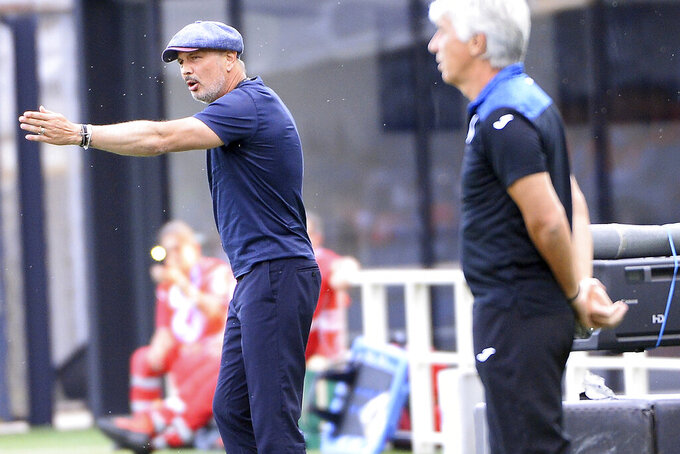 MILAN (AP) — Zlatan Ibrahimović rolled back the years with two impressive goals to help AC Milan beat Sassuolo 2-1 in Serie A on Tuesday.

The 38-year-old Ibrahimović netted twice in the first half, either side of Francesco Caputo’s penalty for Sassuolo.

Sassuolo had to play the entire second half with 10 men after midfielder Mehdi Bourabia was sent off on the stroke of halftime following a second yellow card.

It was Milan’s seventh victory in the nine games since Serie A resumed following the pandemic-enforced shutdown and moved the team up to fifth. It drew the other two matches.

It was confirmed after the match that Milan coach Stefano Pioli had signed a two-year extension to his contract, keeping him at the club until June 2022.

Ibrahimović rejoined Milan in December on a six-month contract with an option for next season.

“Will I stay? There are still three matches, 10 days and no one has said anything else,” the Swedish forward said. “But I’m working, we are doing good things and if we take the table since I arrived I think we would be second or third.”

“We will talk with him immediately after the end of the season, he is also completely focused on these matches and he is doing so in an excellent manner, as always,” Milan sporting director Frederic Massara said. “There will be a meeting and we will see if there are the conditions to be able to continue.

“The contribution he has given is unquestionable, he has transformed the team in its mentality, skill and character, he has helped the growth of many younger players, who are today doing well.”

Ibrahimović gave Milan the lead in the 19th minute with a diving header at the back post following a cross from Hakan Çalhanoğlu.

There was a dramatic end to the half as Caputo leveled from the spot three minutes from the break. The referee had awarded the penalty after reviewing the incident on the pitchside monitor and judging that the ball had hit Çalhanoğlu’s arm.

Çalhanoğlu redeemed himself moments later with a second assist — a through-ball for Ibrahimović to run onto, round the goalkeeper and place into the back of the net.

It was the first time since 1999 that Milan has scored at least two goals in nine successive matches.

Bourabia was given his marching orders but Sassuolo goalkeeper Andrea Consigli kept the scoreline down with several good saves, including preventing Ibrahimović from getting his hat trick.

Luis Muriel proved he has no lasting effects from a domestic accident as he scored the only goal to help Atalanta beat Bologna 1-0.

Muriel, who was wearing protective headgear after needing stitches following a fall on the edge of a swimming pool last week, scored in the 62nd minute.

Atalanta moved into second spot, six points behind Juventus and two above Inter, which both have played a match less.

Atalanta dominated possession but it was Bologna which went closest in the first half with Musa Barrow hitting the crossbar.

Moments earlier Atalanta coach Gian Piero Gasperini was sent to the stands for dissent following an argument with his Bologna counterpart Siniša Mihajlović, who was shown a yellow card.

Muriel was brought on at halftime and he broke the deadlock with a fierce strike after an assist from Duván Zapata.

It was Muriel’s 18th league goal of the season, with most of those goals coming when he has been a substitute.

It also saw Atalanta become the first team since Fiorentina in 1958-59 to score 95 Serie A goals in a season.