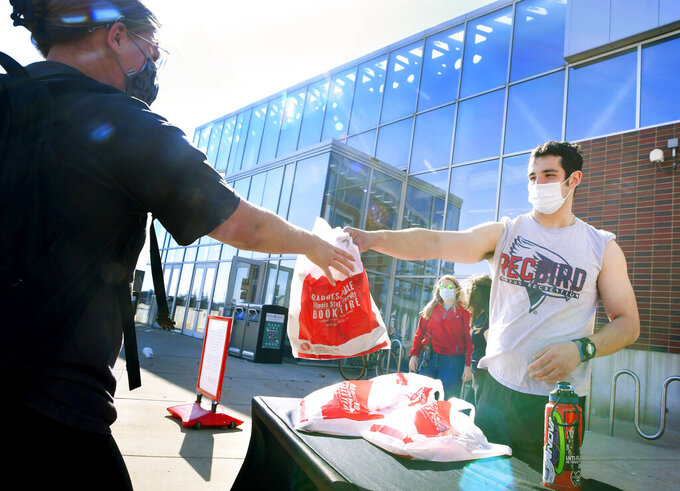 But instead of catching some sun in Mexico, the four of them were playing games on the second floor of the Bone Student Center during the first of two “Personal Well-Being Days” on March 9 and March 10 that ISU substituted for a traditional spring break amid the COVID-19 pandemic.

Normal might not be Cancun or Florida, but Tuesday’s sunshine and temperatures in the 60s gave it a spring feeling. Many students were dressed in T-shirts and shorts, some with palm tree designs.

“At least they’re giving us something to do,” said one of Randall’s roommates, Michaela Dennis, a sophomore in computer science and acting from Forest Park.

Spinning a wheel of chance, they won three decks of cards and a small can of Play-Doh.

The past year must have seemed like spinning a wheel of chance as students saw their 2020 break spread into two weeks with the spread of the coronavirus, then the campus shut down and switched to all-remote learning.

Meanwhile, at another table in the Prairie Room, Peter Meyer of Rockford, a junior in international business, was attempting to use a mathematical formula to guess the number of Starburst candies in a jar to win a prize.

He didn’t seem too disappointed by the cancellation of spring break.

“I can’t complain. The weather is nice,” said Meyer.

The well-being days were scheduled to discourage the travel that might have been more likely with a long weekend.

But Bronson Minton, a graduate student in exercise physiology from Rock Falls, said, “I think all the people who were going to go to Florida went anyway.”

ISU initially had decided to keep spring break, citing concerns over the mental health issues and stress caused by the pandemic. But state officials expressed concern about the possibility of spring break travel spreading COVID-19 among students and the community.

President Larry Dietz announced cancelation of spring break in December, saying the university was doing so “at the urging of state officials.”

Even though traditional spring break was canceled, ISU created the two-day well-being break with no classes “to provide students with the break they need during the middle of the semester,” said spokesman Eric Jome.

A variety of activities, both in-person and virtual, were scheduled, promoting wellness, recreation and entertainment. Free food and snacks were among the giveaways.

Tommy Harris, a sophomore in computer science from Normal, wasn’t planning to go anywhere for break anyway and appreciated the well-being activities.

“Last week we had mid-terms, so things were pretty stressful,” said Harris. He, like many others, is hopeful things will get back to normal soon, especially in-person classes.

“It’s hard to be in the same apartment all the time,” he said.

“I know a lot of people who still struggle learning online,” she said.