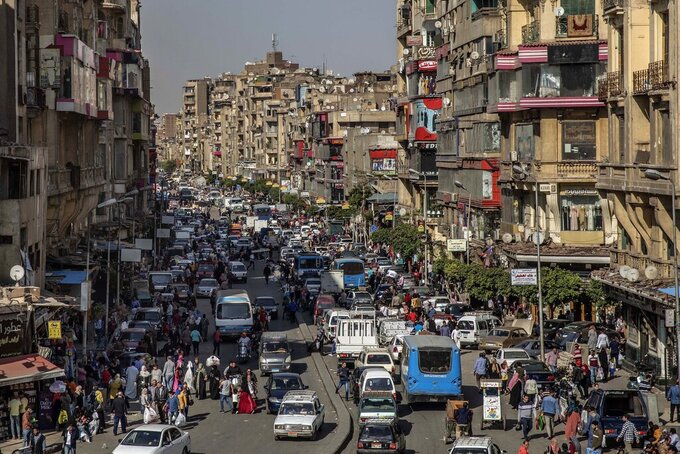 FILE - In this Tuesday, April 14, 2020 file photo, people crowd a street a few hours ahead of curfew in Cairo, Egypt. Wealthier Western countries are considering how to ease lockdown restrictions and start taking gradual steps toward reviving business and daily life. But many developing countries, particularly in the Middle East and Africa, can hardly afford the luxury of any misstep. In Egypt, the Arab world’s most populous country where one in three people lives in poverty, the government opted for a partial lockdown that includes a nighttime curfew, fearing that a full closure would devastate a fragile economy. (AP Photo/Nariman El-Mofty, File)

CAIRO (AP) — The International Monetary Fund has agreed to lend Egypt $2.77 billion in emergency assistance to deal with the economic fallout caused by the coronavirus pandemic, its executive board said Monday.

Although Egypt, which has recorded 9,746 COVID-19 infections and 533 deaths, has not yet seen an outbreak on the scale of the one sweeping the U.S. and Europe, its case count is rising and critical sources of income are vanishing.

Tourism, which accounts for some 12% of Egypt’s gross domestic product, has ground to a halt. Remittances from Egyptian workers abroad, another 10% of GDP, have dropped and the global downturn jeopardizes revenue from the Suez Canal. Schools, mosques, museums and the country’s famed archeological sites have been shuttered. Restaurants, bars, theaters and shops close nightly.

One in three Egyptians were already living in poverty before the outbreak, according to government figures.

Prime Minister Mustafa Madbouly had described the loan as a way to protect foreign currency reserves and hard-won gains over years of significant economic reforms and austerity measures.

Egypt secured a $12 billion bailout package from the IMF in 2016 in exchange for floating the currency, slashing key subsidies and imposing a value-added tax. The painful steps won President Abdel Fattah el-Sissi praise from Cairo’s western backers and bankers. But the policies have squeezed the poor and middle class.

In its statement on Monday, the IMF said that even with the loan, Egypt needs a boost from multilateral and bilateral creditors to close its payment gap and bring the economy back from the edge.