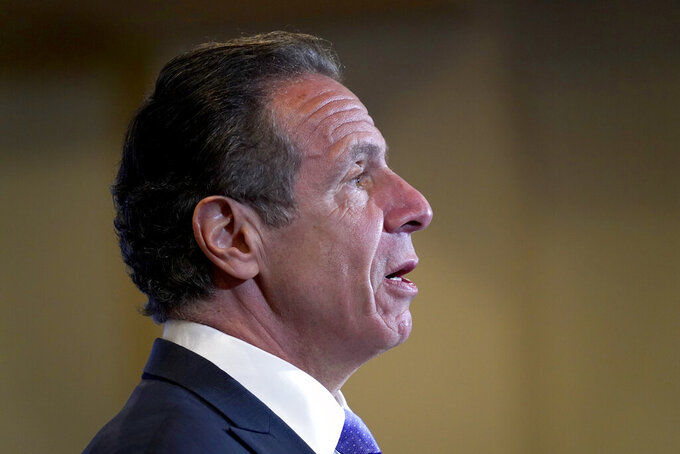 Gov. Andrew Cuomo speaks at Grace Baptist Church, a new pop-up vaccination site, in Mt. Vernon, N.Y., Monday, March 22, 2021. Cuomo was there to encourage all people to get vaccinated, especially those in underserved communities that were the most effected by the pandemic. (AP Photo/Seth Wenig, Pool)

Cuomo, a Democrat, has resisted calls for his resignation after multiple women accused him of sexual harassment. He’s also facing outrage over his administration’s decision to withhold information about COVID-19 deaths in nursing homes.

Judiciary Committee Chair Charles Lavine, a Long Island Democrat, said the legal team hired to investigate Cuomo's actions will meet with witnesses and examine documents to “assess whether there’s evidence that the governor has engaged in conduct that justifies articles of impeachment.”

“Given the breadth and seriousness of the issues under investigation, we expect that the timing will be in terms of months rather than weeks,” Lavine said in a judiciary committee meeting, which was streamed in an audio-only broadcast Tuesday morning.

New York has only impeached a governor once, in 1913.

It isn't clear yet how much of the Assembly's investigation will be transparent to the public. The Judiciary Committee hasn't said yet whether it will hold public hearings.

Cuomo faces allegations that he sexually harassed or behaved inappropriately toward several women, including two current members of his staff. The accusations range from groping under a woman’s shirt and planting unwanted kisses to asking unwelcome personal questions about sex and dating.

The governor has denied touching anyone inappropriately and apologized if he made anyone feel uncomfortable. He has said his administration should have released complete data about nursing home deaths earlier but withheld some fatality statistics because they needed to be verified.

A faction of lawmakers who want Cuomo to quit now have complained that the investigation is buying time for Cuomo. Others have said he deserves thorough due process.

Some of Cuomo's critics, including some of the women who have accused him of wrongdoing, had assailed the choice of that firm on the grounds that one of its retired partners, Dennis Glazer, was a Cuomo political appointee and is married to the state's chief judge, who would sit on any impeachment court.

Both Lavine and Beamon said they reviewed potential conflicts of interest and decided there aren't any. Glazer hasn't had any involvement in the firm's business or activities since his 2012 retirement, the firm's lawyers said.