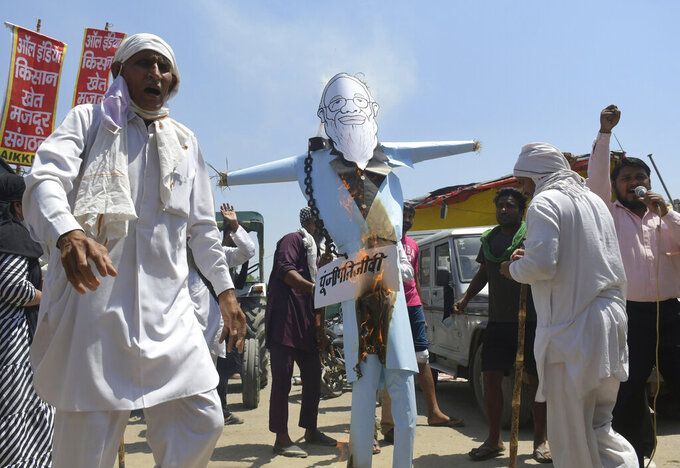 Protesting farmers burn an effigy of Indian Prime Minister Narendra Modi at the Delhi- Haryana border, outskirts of New Delhi, India, Wednesday, May 26, 2021. Farmers are marking six months of their agitation against the new agricultural laws they say will leave them poorer and at the mercy of big corporations. The government has billed the laws as necessary to modernize agriculture. Multiple rounds of talks between the government and farmers have failed to end the stalemate. (AP Photo/Ishant Chauhan)

Protesters have been blocking three highways connecting New Delhi to northern and western cities since November to press their demand for scrapping of the laws they say will favor large corporate farms. The protest has continued despite a surge in coronavirus cases that has overwhelmed the country.

The black flags were flown Wednesday in several cities, towns and villages around the capital. Some burned effigies of Prime Minister Narendra Modi.

“Modi your dictatorship will not last,” some farmers chanted.

The government says the laws approved by Parliament last year will inject private investment in the agriculture sector and raise the earnings of farmers by setting up warehouses in rural areas where they can store their crops and sell them when prices favor them.

The farmers say the new legislation will devastate their earnings by ending guaranteed pricing and force them to sell their crops to corporations at cheaper prices.

In January, the Supreme Court stayed the implementation of the new laws and created a committee to address the farmer’s grievances.

Agriculture Minister Narendra Singh Tomar has held several rounds of talks with protest leaders and offered to suspend the laws for a year and a half during which a solution can be reached through dialogue. The farmers are demanding an immediate repeal of the laws.