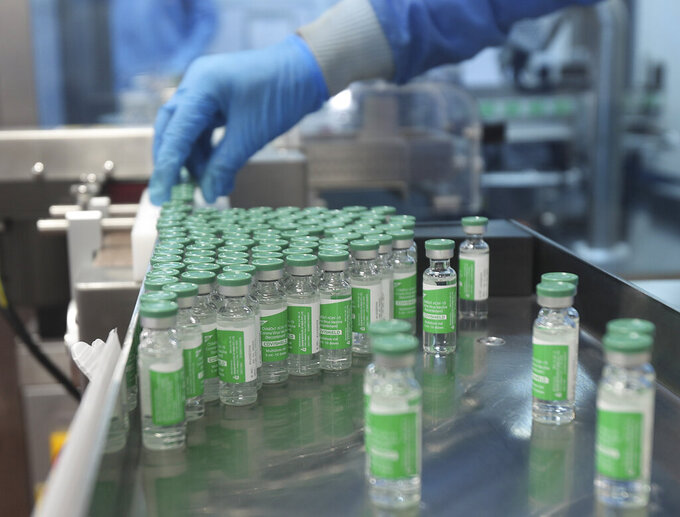 An employee works inside a laboratory at the Serum Institute of India, the world's largest vaccine maker, in Pune, India, Thursday, Jan. 21, 2021. The company is a key supplier for the U.N.-backed COVAX program that aims to distribute vaccines equitably in the world. On March 25, COVAX announced a major setback in its vaccine rollout because a surge in infections in India had caused the Serum Institute of India to cater to domestic demand, resulting in a delay in global shipments of up to 90 million doses. (AP Photo/Rafiq Maqbool)

NEW DELHI (AP) — The chief executive of Serum Institute of India, the world’s largest maker of vaccines and a critical supplier of the U.N.-backed COVAX facility, asked President Joe Biden on Twitter to lift the U.S. embargo on exporting raw materials needed to make the jabs.

Vaccine makers and experts in India have been concerned that the use of the Defense Production Act by the U.S. to boost it own vaccine production was resulting in exports of critical raw materials being stopped. This was hobbling vaccine production in other parts of the world.

“If we are to truly unite in beating this virus, on behalf of the vaccine industry outside the U.S., I humbly request you to lift the embargo of raw material exports out of the U.S. so that vaccine production can ramp up," wrote Adar Poonawalla, CEO of Serum Institute of India.

He had earlier told The Associated Press that pivoting away from suppliers in the U.S. could result in a delay of up to six months for the production of the COVID-19 vaccine developed by Novavax. Serum Institute and Novavax have inked a deal to supply 1.1 billion doses of the vaccine to COVAX to equitably distribute it across the globe.

Separately, 10 Democratic senators are urging Biden to back India and South Africa’s appeal to the World Trade Organization to temporarily relax intellectual property rules so coronavirus vaccines can be manufactured by nations that are struggling to inoculate their populations.

The lawmakers, in a letter delivered to the White House on Thursday evening, wrote that Biden should “prioritize people over pharmaceutical company profits” and support the temporary waiver of the rules. A waiver, which is supported by more than 100 nations, could pave the way for generic or other manufacturers to make more vaccines.

India, in particular, is facing tremendous need. Serum Institute of India paused exports to COVAX after a devastating surge of infections in India resulted in increased domestic demand.

Over 200,000 new infections were detected in the past 24 hours, and major cities, like Mumbai and New Delhi, are under virus restrictions. Hospitals are overwhelmed, and authorities are scrambling to try to vaccinate enough people to slow down the spread. But in doing so, India relies heavily on AstraZeneca shots made by Serum Institute of India.

Poonawalla had said the unavailability of the raw materials, such as the specific medium needed to grow microorganisms, would prevent Serum Institute from scaling up the production of the vaccine developed by Novavax.

The company had been planning to make up to 40 million shots of the vaccine monthly.

Ramping up the production of this shot could also help India. Novavax has applied for authorization of the vaccine to regulators in Europe, the U.S. and the World Health Organization. If the vaccine is approved, India would be able to use it under new regulations that make it easier to greenlight vaccines that have received the nod by the U.K., the U.S., Europe, Japan or WHO.

This story has been corrected to show that Novavax applied for regular license.