Indians' Carrasco on another journey, this time in pandemic 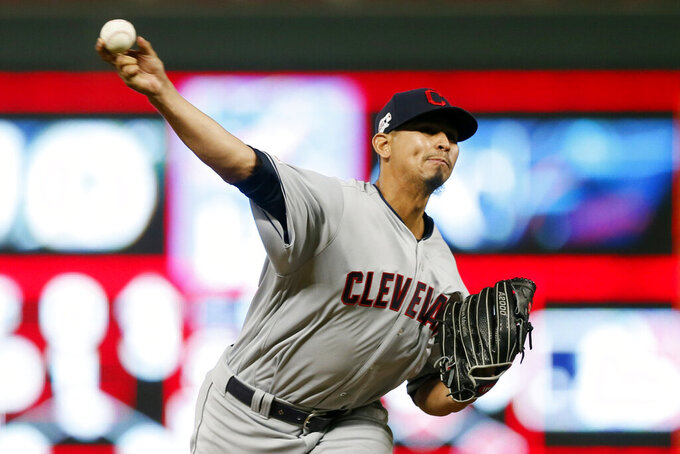 FILE - In this Sept 6, 2019, file photo, Cleveland Indians pitcher Carlos Carrasco throws against the Minnesota Twins in a baseball game in Minneapolis. The Indians’ right-hander, who made a dramatic comeback last season after being diagnosed with leukemia, has been cleared to pitch and is thrilled to be back on the field after baseball was shut down during the COVID-19 pandemic. Carrasco said his health is good and his doctors have approved him playing despite the inherent risks. (AP Photo/Jim Mone, File) 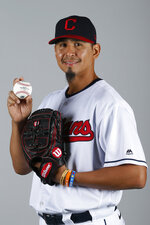 CLEVELAND (AP) — Not even a mask can hide Carlos Carrasco's smile or muffle his joy.

For now, baseball's back. And he is as well.

A year after a leukemia diagnosis threatened his life and nearly ended his playing career, Carrasco is staging another comeback. In remission and medically cleared to pitch, the 33-year-old right-hander and his Cleveland Indians teammates took their first steps Friday toward resuming a delayed major league season that has been drastically changed by the COVID-19 pandemic.

“It’s completely different,” Carrasco said following a workout at Progressive Field. "But we will get through this.”

It's that spirit that propelled Carrasco last season, when he battled cancer and made a journey back to the mound. He never flinched during an ordeal that went from being highly personal to public as the Indians — and all of Cleveland — rallied around the easygoing Carrasco, who is best known to his teammates and fans as “Cookie.”

Following his moving in-game appearance in a salute to cancer survivors during the All-Star Game in Cleveland last July, “I Stand With Cookie” T-shirts became a local symbol of unity. Carrasco's return to pitch in relief after a nearly three-month absence became the high point in a season that ended short of the playoffs.

Now, as he tries to lock down a starting job in Cleveland's rotation, Carrasco has to be especially cautious. Because of his illness, Carrasco is at a higher risk of contracting the coronavirus. He's confident the medical guidelines and protocols set up by the Indians will protect him.

“Before getting here, I got a meeting with my medical staff and everyone and I’m good to go,” he said. "So that’s why I’m here. The guys here at the ballpark, the medical staff, they do a great job to follow the rules, wear the masks and I think it’s a great setup in here.

"And my teammates understand what’s gone on with me last year and they just want to be careful, trying to do everything by the rules. Everyone is just so happy to see me here with the team.”

While the Indians were working out, team President Chris Antonetti announced outfielder Delino DeShields Jr. tested positive for the coronavirus. He was acquired from Texas in December in the trade involving two-time Cy Young winner Corey Kluber.

“Delino is doing really well,” said Antonetti, adding DeShields will have to twice test negative before joining the team. ”He has very mild symptoms. At this time he has a diminished sense of taste and smell. We received permission from Delino to disclose that. He wanted to share that with everyone and let them know he’s doing well.”

Before spring training in Arizona was halted by the virus outbreak in March, Carrasco had been slowed by a hip issue and some elbow inflammation. But he's completely recovered and said he's progressed to where he can pitch six innings.

Not surprisingly, Carrasco didn't let the pandemic alter his plans to pitch in 2020.

When he returned to Florida, Carrasco installed a pitching mound in the front yard of his house and threw to a neighbor, who happens to be a college catcher.

“It’s just right in front of the door,” he said of the portable mound. “I can move it anywhere I want to. From Day One, I just wanted to work out from the house. I did every day and I loved it. I got addicted to lifting weights every day and throwing every day. It was nice. Now, thank God I did all that in those three months back home, working really hard so now everything for me is like back to normal.”

The Indians can't wait to see him pitch.

“I’m stoked!” said right-hander Shane Bieber, who expects to start the stalled season opener. “It’s good to see him, always. Whenever we’re talking about Cookie, it’s always about what a bright spot in the clubhouse he is and his personality. You can still see his smile, even behind a face mask. He’s the man.”

Indians manager Terry Francona said the team would have supported Carrasco if he had opted not to play, given the high health risk.

“It’s certainly not a knee injury and something you’d put in a different category, but it’s nice to see him back and smiling and laughing and throwing the ball,” Francona said. “I’m glad he’s being part of this."