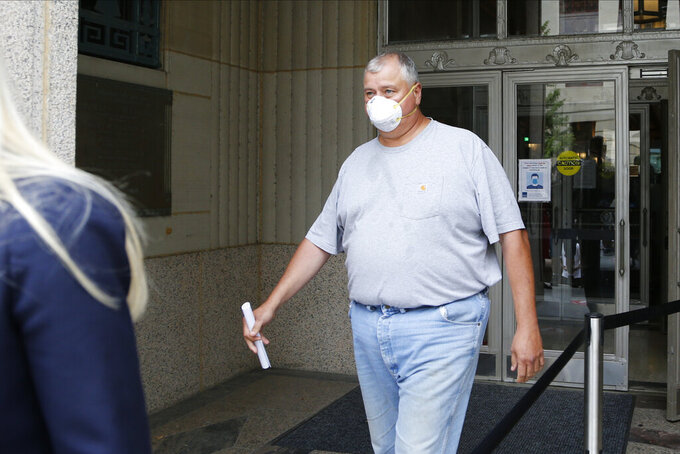 FILE – In this Tuesday, July 21, 2020, file photo, then-Ohio House Speaker Larry Householder leaves the federal courthouse after an initial hearing following charges against him and four others alleging a $60 million bribery scheme in Columbus, Ohio. On Thursday, March 4, 2021, Householder joined the line of GOP critics of Ohio's anti-coronavirus efforts by introducing his own pair of bills to trim public health officials' powers during the pandemic. (AP Photo/Jay LaPrete, File)

COLUMBUS, Ohio (AP) — A disgraced Republican lawmaker on Thursday introduced a pair of pandemic-related bills aimed at bringing checks and balances to Ohio government while he is under a federal investigation for his alleged role in a $61 million bribery scheme.

Rep. Larry Householder joined the line of GOP critics of Ohio’s anti-coronavirus efforts by introducing his own pair of bills to trim public health officials’ powers during the pandemic.

The first piece of legislation the two-time lawmaker introduced would allow for a board of county commissioners to terminate or modify any order issued by a county board of health. The other legislation would similarly handicap any health order brought on by the Ohio Department of Health or Republican Gov. Mike DeWine by allowing the General Assembly to modify or terminate any order with a simple majority vote from both chambers.

The pair of bills match the legislative action taken by a number of Republicans since DeWine began to issues orders last March in an effort to limit the spread of the coronavirus. The governor vetoed a similar GOP-backed Senate bill to limit his pandemic authority in December but now appears to be working with the Legislature on another similar bill moving through the House.

The pair of bills ended months of legislative silence for Householder following his indictment last summer on racketeering charges in the alleged bribery scheme to pass a $1.3 billion bailout of two Ohio nuclear plants.

The former House speaker was one of the driving forces behind the nuclear plants’ financial rescue, which added a new fee to every electricity bill in the state and directed over $150 million a year through 2026 to the plants near Cleveland and Toledo. He has pleaded not guilty.

His successor, House Speaker Bob Cupp, remained mum Thursday on the topic and the use of the majority party’s resources to promote Householder's bills.

“Mr. Householder is a member of the Ohio House and members have the right to introduce bills and they will be handled according to the rules of the House,” Cupp, a Lima Republican, told reporters.

The House has remained in limbo over Householder’s seat, with Democrats pushing to have him removed only to be later rebuked by their Republican colleagues. The momentum to remove Householder in the days after the federal affidavit was released in July died down in the last session as the House became inundated with virus and election-related legislation.

Cupp has reiterated that he believes Householder should resign from his seat without forcing the GOP caucus to remove him.