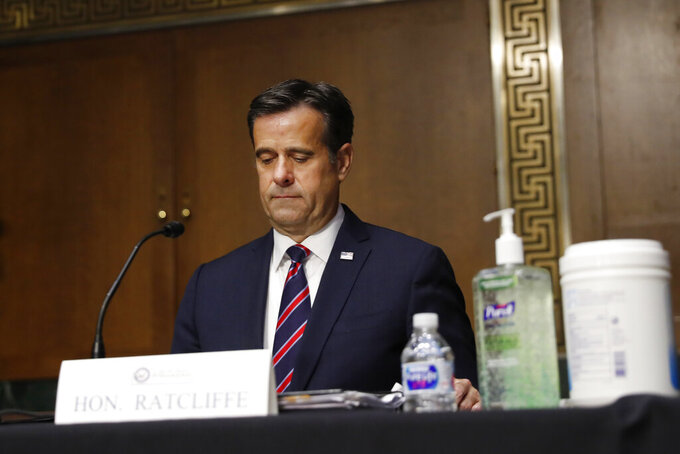 WASHINGTON (AP) — President Donald Trump's nominee for national intelligence director sought at his confirmation hearing Tuesday to shed his reputation as a loyalist to the president, insisting to skeptical Democrats that he would carry out the job free of political influence or partisan bias.

The comments from Rep. John Ratcliffe, a Texas Republican, were aimed at quelling Democratic fears that he would be vulnerable to pressure from a president who is often perceived as politicizing intelligence and who publicly disputes intelligence conclusions at odds with his personal views. Those concerns are amplified at a time when intelligence agencies are investigating politically sensitive issues, including election meddling and the cause of the coronavirus pandemic.

Senators repeatedly pressed Ratcliffe on whether he could stand up to Trump by presenting him with analysis he did not like. They also asked whether he agreed with the president's assertions that intelligence agencies had “run amok” and were infiltrated by the “deep state." Ratcliffe refused to endorsed either claim and insisted he would not shape intelligence findings to meet the desires of anyone.

“Let me be very clear: Regardless of what anyone wants our intelligence to reflect, the intelligence I will provide, if confirmed, will not be impacted or altered as a result of outside influence,” he told the Senate Intelligence Committee.

Republican Sen. Richard Burr, the committee chairman, said after the hearing that he was satisfied Ratcliffe would serve “in an independent capacity." He promised a quick vote on his nomination.

But Sen. Chuck Schumer, speaking on the Senate floor as the hearing was underway, spoke for many Democrats by dismissing Ratcliffe as a "deeply partisan cheerleader for the president, a yes man in every sense of the phrase.”

The confirmation hearing, the first in-person one held under drastic new distancing rules for the coronavirus, comes at a tumultuous time for the intelligence agencies. About a half dozen intelligence community leaders have resigned or been ousted over the last year and agencies already grappling with the prospect of Russian interference in November’s election are now probing the politically charged question of whether the coronavirus is man-made or originated in a Chinese laboratory.

Ratcliffe’s path to the job has been similarly topsy-turvy, with the original nomination withdrawn after bipartisan criticism he was unqualified to oversee 17 U.S. spy agencies. Trump unexpectedly renominated him in February. His chances of securing the job appear better this time around.

Democrats revealed their skepticism in occasionally contentious questioning, with Sen. Dianne Feinstein of California pressing Ratcliffe over past comments about whistleblowers and New Mexico Sen. Martin Heinrich asking for instances of when Ratcliffe had ever “spoken truth to power,” particularly involving the president.

“I have to say that while I am willing to give you the benefit of the doubt at this hearing, I don’t see what has changed since last summer when the president decided not to proceed with your nomination,” said Virginia Sen. Mark Warner, the panel’s top Democrat.

Ratcliffe took pains to break with the president, including by saying he believed Russia interfered in the 2016 presidential election and was prepared to do so again, a conclusion Trump has often resisted. And he answered “of course” when asked by Republican Sen. Susan Collins if he would communicate to Trump the intelligence community’s findings even if he knew Trump disagreed with them and might fire him.

When it comes to investigating the coronavirus origins, Ratcliffe pledged that he would be “laser-focused” in that task — a key concern to Trump and other administration officials who have raised the idea that it could have emerged from a Chinese lab, perhaps accidentally. Ratcliffe initially said that he had not seen intelligence that it had come from a lab but later said he had not seen intelligence that it was man-made either.

Tuesday’s hearing tested the Senate’s ability to conduct business safely with coronavirus cases still on the rise in the Washington area. Senate Majority Leader Mitch McConnell, R-Ky., called his chamber back to work Monday, while House Speaker Nancy Pelosi, D-Calif., kept the House away, saying she had been advised by the Capitol physician that it was not yet safe to convene.

Attendance at the session was restricted, with members encouraged to watch as much as possible from their offices and come to the room when it was time for their questions. No more than two dozen people were there at any point, with the public barred from the Capitol complex.

Lawmakers concerned by turnover within intelligence community leadership are eager for a permanent, Senate-confirmed replacement for Dan Coats, who left the DNI post last summer and had bipartisan support. About a half dozen officials have either resigned or been fired, including the intelligence community inspector general who brought forward a whistleblower complaint that led to Trump's impeachment.

The DNI position is currently held in an acting capacity by Trump loyalist Richard Grenell, the U.S. ambassador to Germany.

Some senators who previously seemed cool to Ratcliffe’s nomination appeared to soften.

Collins, a critical GOP swing vote on the panel, said last summer that she had never heard of Ratcliffe before his nomination. But last week she said she had spoken with him and concluded that he has the experience “to meet the statutory standard” for the position.

Ratcliffe sits on the House intelligence, judiciary and ethics committees and has been a fierce defender of Trump. He forcefully questioned former special counsel Robert Mueller last summer when he testified about the Russia investigation.

He was also a member of Trump’s impeachment advisory team last fall and aggressively questioned witnesses during House impeachment hearings.