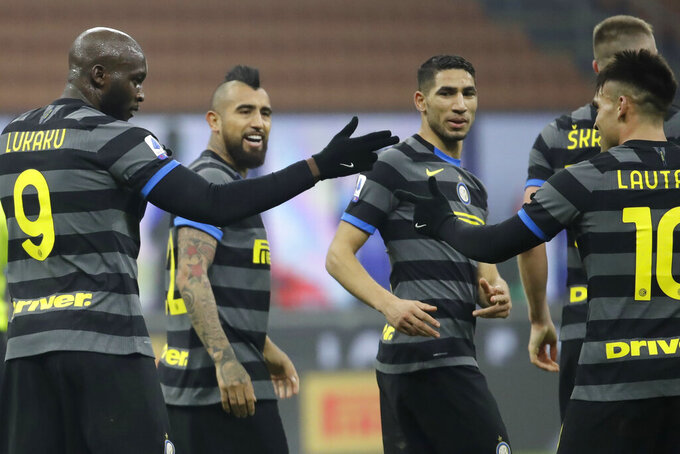 Inter Milan's Romelu Lukaku, left, celebrates with his teammate Lautaro Martinez, right, his goal against Benevento during a Serie A soccer match between Inter Milan and Benevento at the San Siro stadium in Milan, Italy, Saturday, Jan. 30, 2021. (AP Photo/Luca Bruno)

ROME (AP) — There were no last-minute deals involving Serie A title contender Inter Milan before the transfer window closed in Italy.

And that was by design.

There was speculation about a possible swap deal with Edin Džeko joining Inter and Alexis Sánchez going to Roma but Marotta said that was mostly made up by agents and "negotiations between the clubs never really took off, because we knew we couldn’t complete expensive deals.”

Inter trails Serie A leader and city rival AC Milan by just two points but there has been speculation club owner Suning is in talks to sell the club.

The coronavirus pandemic also made a big impact on the club’s market strategy, Marotta said.

“We’re up against something extraordinary,” Marotta told Italy’s Sky TV. “The pandemic has made a big impact and the old model is not sustainable now. … We’re not going to see deals with huge transfer fees and salaries anymore.”

Instead, Marotta said Inter was focused on renewing the contracts of 23-year-old forward Lautaro Martínez and 21-year-old defender Alessandro Bastoni.

“We’re operating conservatively and trying to take advantage of our own assets,” Marotta said. “It’s also a form of respect toward our young players who have shown they are worthy of handling their positions.”