Interfaith group: No Buddhist or Hindu statues in nightclubs 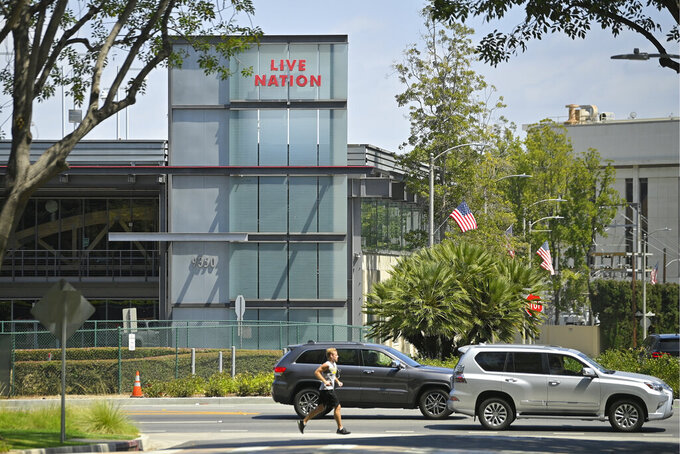 The headquarters of Live Nation is viewed Monday, June 29, 2020, in Beverly Hills, Calif. America's nightclubs are largely closed because of the coronavirus pandemic, but that isn't stopping an interfaith coalition from launching a campaign to stop what organizers call the "disrespectful" use of Buddhist and Hindu statues as upscale decor. Representatives of the Buddhist, Hindu, Jain, Jewish and Christian traditions have formed an improbable alliance to end the practice, starting with upmarket clubs in Boston and other cities that are managed by Live Nation, a Beverly Hills, California-based entertainment conglomerate. (AP Photo/Mark J. Terrill)

BOSTON (AP) — America’s nightclubs are largely closed because of the coronavirus pandemic, but that isn’t stopping an interfaith coalition from launching a campaign to stop what organizers call the “disrespectful” use of sacred Buddhist and Hindu statues as decor.

Representatives of the Buddhist, Hindu, Jain, Jewish and Christian traditions have formed an improbable alliance to end the practice, starting with upscale clubs in Boston and other cities that are managed by Beverly Hills, California-based Live Nation Entertainment.

Campaign spokesperson Rajan Zed told The Associated Press the campaign was not deliberately timed to coincide with the national conversation on injustice in the aftermath of high-profile deaths of Black Americans, but acknowledged the time may be ripe to address what he called the “highly inappropriate” misuse of sacred icons.

“Symbols of faith shouldn’t be mishandled,” said Zed, president of the Universal Society of Hinduism, a Reno, Nevada-based organization that works to promote Hindu identity and foster dialogue between religions. “Hindu deities are meant to be worshiped in temples or home shrines — not to be thrown around loosely in a nightclub for dramatic effect.”

The coalition draws a distinction between sacred depictions of religious leaders such as Gautama Buddha, the founder of Buddhism, and the “Laughing Buddha” or “Fat Buddha” statues frequently seen at Asian restaurants.

In addition to pushing for the removal of statues of Buddha as well as Hindu divinities such as Ganesha, Shiva, Rama and Hanuman, the group is demanding a public apology from Live Nation executives for misappropriating the sacred figures.

Statues of revered figures such as Mahavira and Parshvanatha “belong in temples for veneration, not to be misused or mishandled by nightclub patrons,” Jainist leader Sulekh C. Jain said in a statement. He suggested Live Nation, which includes the Ticketmaster entertainment events platform, could donate the statues to Jain temples in the U.S., and the Jain community would pay the shipping costs.

Live Nation's House of Blues said in a statement that its Foundation Room clubs have "always been focused on promoting unity, peace and harmony — which is more important now to the world than ever.”

“In this spirit, we reached out to the coalition last week to discuss and mutually understand how we can best work together for the common good. We deeply apologize and immediately removed the statue Mahavira from all of our venues,” it said. "We are reassessing the presence of all deities in our venues and engaging with the coalition and other religious experts to advise on next steps, including removal, relocation or other appropriate actions. We have always strived to promote dialogue to bring us closer together and are committed to this sentiment moving forward.”

Zed has campaigned against what he considers the misuse of Eastern religious imagery for commercial purposes for several years. In 2019, he extracted an apology from a Virginia brewery that brewed a beer named for a Hindu deity, saying that associating Lord Hanuman with alcohol was disrespectful.

Practicing Hindus object to wine glasses being placed by intoxicated club patrons near or on sacred statues, Zed said, calling it “highly insensitive" and "quite denigrating.”

Zed said he's also lodged complaints with more than a dozen major companies for “inappropriate portrayal of Hinduism and misappropriation of our culture,” including Amazon, Etsy, Nordstrom, Urban Outfitters, Walmart and Wayfair.

Asian cultures long have frowned on the cultural misappropriation of Buddha. At the airport in Bangkok, Thailand, for instance, immigration kiosks discourage tourists from exporting figurines with signs chiding visitors that Buddha is not a souvenir.