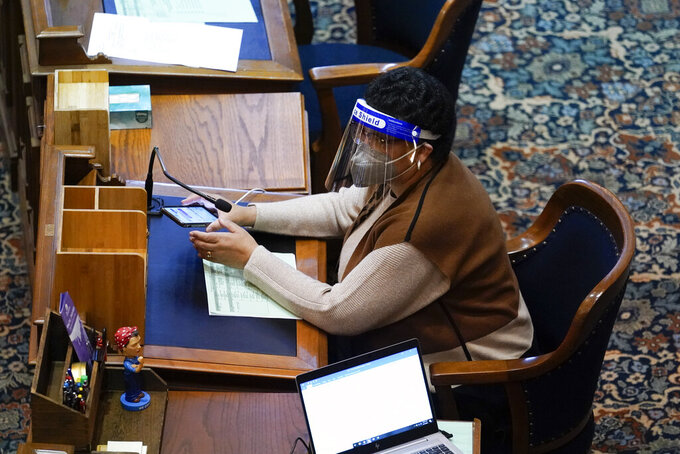 Rep. Phyllis Thede, D-Bettendorf, works at her desk during the opening day of the Iowa Legislature, Monday, Jan. 11, 2021, at the Statehouse in Des Moines, Iowa. (AP Photo/Charlie Neibergall)

DES MOINES, Iowa (AP) — Iowa lawmakers began their legislative session on Monday with no mask requirements, and many members opted not to wear face coverings even as rates of coronavirus infections rise in the Des Moines area and much of the state.

Republicans, who hold majorities in both the House and Senate, chose not to mandate masks or even require that members disclose if they have been infected by the virus. During opening ceremonies, most Republicans didn't wear masks while all Democrats were protected by a mask or face shield.

“There’s nothing we can do stop a member from coming on the floor of the House to take a vote even if did they have a positive case or they chose they were not going to wear a mask,” said House Speaker Pat Grassley.

Grassley and Senate Majority leader Jack Whitver said they've taken measures to allow for social distancing and have suggested to their members that masks be worn when they can't remain apart.

Whitver said subcommittee meetings, which often resulted in small meeting rooms packed with lobbyists, citizens, reporters and lawmakers, will be held on Zoom, and full committees will meet in the Senate chamber.

“So, the thought that someone’s going to test positive and then just continue to come to the Capitol and try to spread it to people, I don’t think that’s an accurate perception of what would likely happen at the Capitol,” Whitver said.

Grassley said all meetings will be at the Capitol but only in rooms with space for more distant seating and with all meetings streamed on the internet.

Democrats criticized the protocols and said they would require members to wear masks. Most will not be in the Capitol for routine work, opting to be at a remote location in state buildings around the Capitol where distancing is possible, Democratic leaders said.

While most Republicans didn't wear masks in the chambers, more than 200 people gathered in the Capitol rotunda without masks to voice their opposition to rules intended to slow the spread of the virus, which has killed over 4,000 people in Iowa.

The protesters arrived more than an hour before the session began and delivered speeches in a space between the House and Senate chambers.

They chanted “freedom” and many held signs that said “coercion is not consent,” “Iowa businesses are not public health police” and “mandates belong in socialist countries.”

Iowa Gov. Kim Reynolds has resisted requiring masks since the outbreak began in the spring but now requires them in many public indoor spaces where people cannot socially distance. Those rules don't apply to the Legislature, which Reynolds notes is a separate branch of government and one she argues should set its own guidelines.

Reynolds, a strong supporter of President Donald Trump, has said it's best to avoid mandates and leave it to individual citizens to take necessary precautions. She has taken pride in her efforts to keep most businesses open and said her approach has been a difficult balance between protecting lives and livelihoods.

During the pandemic 4,139 Iowans have died, and deaths and virus activity are again increasing.

The state posted an additional death on Monday. The total confirmed positive case count rose to 296,866.

State public health data shows Polk County, home to the state Capitol, has a 15.19% coronavirus positivity rate. It is one of 58 counties over 15%, a level that signifies significant community spread of the virus.

Security was heightened at the building with Iowa State Patrol officers stationed outside public entrances and throughout the building. A spokesman didn’t immediately respond to a request for comment, It was unclear if it was due to expectations of possible violent outbreaks similar to those at the U.S. Capitol last week or because of the large protest at the building.