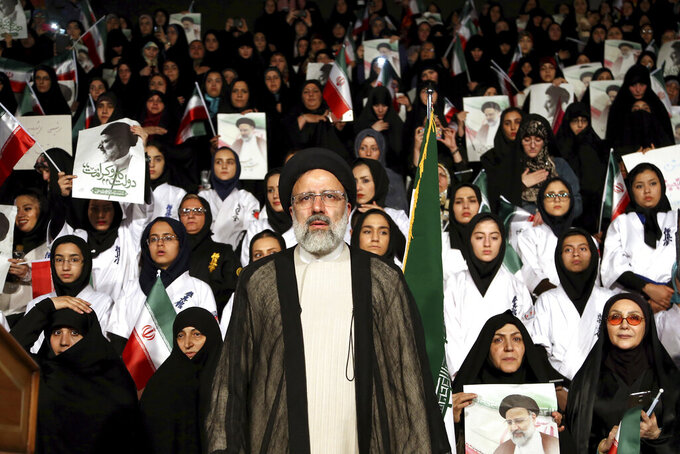 He arrived at the Interior Ministry on Saturday, the last day of registering, to put himself into the race.

Raisi has been named as a possible successor to Iran's 82-year-old Supreme Leader Ayatollah Ali Khamenei. That had some suggesting he wouldn't run in the race.

He ran against Iranian President Hassan Rouhani and lost in the 2017 presidential election, though he still garnered nearly 16 million votes in his campaign.

Raisi has since conducted high-profile anti-corruption arrests and trials, many televised, gaining support of average Iranians frustrated by the country's poor economy.

However, international rights groups have criticized Raisi for reportedly serving on a 1988 panel that sentenced thousands of prisoners to death in the waning days of Iran's 1980s war with Iraq. Raisi has never publicly acknowledged his role in the sentences.

Raisi had been the head of the Imam Reza charity foundation, known as “Astan-e Quds-e Razavi,” in Farsi. It is believed to be one of the biggest charities in the country, which manages a vast conglomerate of businesses and endowments.

TEHRAN, Iran (AP) — A former speaker of Iran's parliament registered Saturday to run in the Islamic Republic's upcoming presidential election, becoming the first high-profile candidate to potentially back the policies of the outgoing administration that reached Tehran's tattered nuclear deal with world powers.

The decision by Ali Larijani, long a prominent conservative voice who later allied himself with Iran's relatively moderate President Hassan Rouhani, came on the last day of registration for the June 18 election. While a panel overseen by Supreme Leader Ayatollah Ali Khamenei ultimately will approve candidates, Larijani has maintained close ties to the cleric over his decades in government.

Journalists in Tehran watched Larijani, 63, register at the Interior Ministry, which oversees elections. He waved to onlookers after completing the process, his face covered by a blue surgical mask as Iran continues to battle the coronavirus pandemic.

Larijani, a former commander in Iran's paramilitary Revolutionary Guard, previously served as the minister of culture and Islamic guidance and as the head of Iran's state broadcaster. Under hard-line President Mahmoud Ahmadinejad, he served as secretary of Iran's powerful Supreme National Security Council for two years, and as a senior nuclear negotiator. He later became speaker of the Iranian parliament for some 12 years, stepping down in May 2020.

Larijani's family includes prominent members of Iran's theocracy, with his cleric brother once serving as the head of the Iranian judiciary. His father was a prominent ayatollah.

Larijani had an active role in signing a 25-year strategic agreement with China earlier this year. On Friday, as a sign of respect, Larijani reportedly asked permission to run from high-ranking clerics in the religious city of Qom.

Within Iran, candidates exist on a political spectrum that broadly includes hard-liners who want to expand Iran’s nuclear program, moderates who hold onto the status quo, and reformists who want to change the theocracy from within.

Those calling for radical change find themselves blocked from even running for office by the Guardian Council, a 12-member panel that vets and approves candidates under Khamenei’s watch.

“Like outgoing President Rouhani, Larijani is someone Khamenei trusts to represent Iran without compromising the regime’s basic tenets of religious supervision over society and independence from foreign powers,” Barbara Slavin, the director of the Future of Iran Initiative at the Atlantic Council, wrote recently.

A clear candidate has yet to emerge within the reformists. Some have mentioned Foreign Minister Mohammad Javad Zarif, though he later said he wouldn't run after a scandal over a leaked recording in which he offered frank criticism of the Guard and the limits of the civilian government’s power.

Several other candidates have prominent backgrounds in the Guard, a paramilitary force answerable only to Khamenei. Hard-liners have increasingly suggested a former military commander should be president given the country’s problems, something that hasn’t happened since Iran’s 1979 Islamic Revolution and the purge of the armed forces that followed.

Iran’s former hard-line President Mahmoud Ahmadinejad also registered Wednesday. Though his attempt to run in 2017 ultimately was blocked after Khamenei criticized Ahmadinejad, this year the supreme leader has not warned him off.