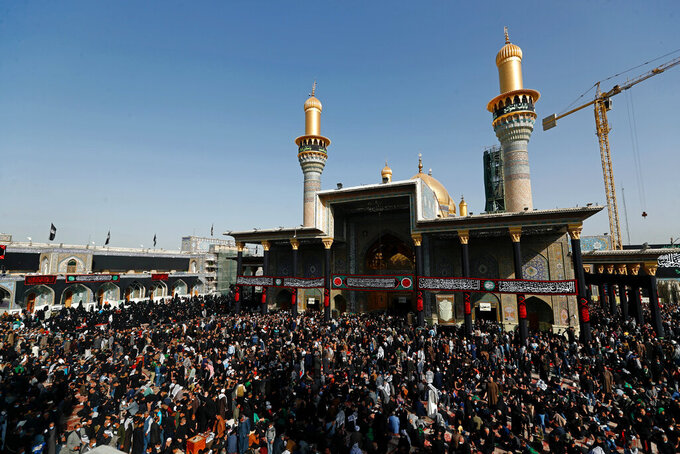 Shiite worshippers gather at the golden-domed shrine of Imam Moussa al-Kadhim, who died at the end of the 8th century, during the annual commemoration of the saint's death, in Baghdad, Iraq, Wednesday, March 10, 2021. (AP Photo/Hadi Mizban)

BAGHDAD (AP) — Thousands of pilgrims clad in black marched through the streets of Baghdad on Wednesday, part of a weeklong procession to a revered shrine, bypassing barbed wire set up by security forces and spurring fears of another wave of coronavirus on the heels of the papal visit.

Crowds of men and women defied the tight security measures imposed by Iraqi authorities to contain the spread of the virus during the annual pilgrimage, expected to reach its peak number of worshippers during the day to commemorate the death of Imam al-Kadhim, a revered figure in Shiite Islam.

Also on Wednesday, a grenade was tossed near the Imam Bridge in Baghdad, killing a woman and wounding 11 pilgrims. No one immediately claimed responsibility for the bombing. The bridge is located on the Tigris River, connecting the predominately Sunni Adhamiya area to Kadhimiya, which is mostly Shiite.

Iraq is in the midst of another wave of the coronavirus, spurred chiefly by a more infectious strain that was first discovered in the U.K. The country has imposed a full lockdown from Friday to Sunday, and partial curfew beginning at 8 p.m. and ending at 5 a.m., for the rest of the week. Non-essential businesses, as well as schools and mosques, are to be closed during this time under the restrictions.

But pilgrims have continued on their way to the shrine despite these regulations. The event usually draws millions of pilgrims from around the world each year to Baghdad, to visit the gold-domed shrine containing the imam’s resting place.

Iraqis have continued to disregard safety protocols, with authorities appearing largely unable to enforce them. In central Baghdad, outdoor tea shops are packed with men smoking shisha, or waterpipes, and facemasks are seldom worn.

At least 22 people died in Iraq on Tuesday, while 6,410 new infections were recorded over the past 24 hours, according to Health Ministry statistics, topping the previous record of daily new infections of 5,055 on September 23.

A visit to Iraq by Pope Francis, which ended on Monday, drew concerns as infectious disease experts had questioned the wisdom of such a trip given Iraq’s rising virus case numbers. Crowds gathered to catch a glimpse of the pontiff across five provinces, including Baghdad, Ninevah and Irbil where a crowd of 10,000 people attended an open-air mass.