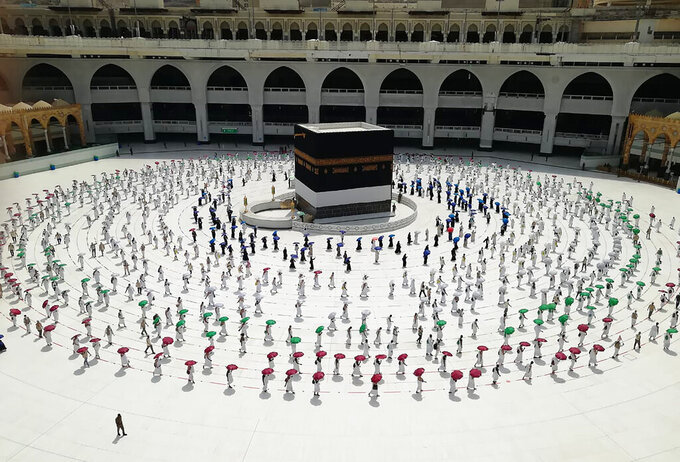 Hundreds of Muslim pilgrims circle the Kaaba, the cubic building at the Grand Mosque, as they observe social distancing to protect themselves against the coronavirus, in the Muslim holy city of Mecca, Saudi Arabia, Wednesday, July 29, 2020 During the first rites of hajj, Muslims circle the Kaaba counter-clockwise seven times while reciting supplications to God, then walk between two hills where Ibrahim's wife, Hagar, is believed to have run as she searched for water for her dying son before God brought forth a well that runs to this day. (AP Photo)

For Marwa Conelly, the upcoming Islamic Eid al-Adha holiday was supposed to be extra celebratory this year — she was looking forward to getting engaged around that time.

Then she lost her father to the coronavirus, and less than 24 hours later her mother, who died unaware her husband, whom she had known since childhood, was gone. Now the thought of spending Eid at their home without them fills Conelly with dread.

“I will miss them,” Conelly said. “I just want to go to sleep and wake up to find that the Eid period has passed already.”

With the coronavirus ravaging the world, Eid comes as the wounds of the bereaved are raw, and for Muslims in the throes of grief, it can amplify the pain. Many are wrestling with how to navigate its rituals without lost loved ones, as some seek ways to honor the departed during the holiday.

Eid al-Adha, or “Feast of the Sacrifice,” commemorates the Quranic tale of the Prophet Ibrahim’s willingness to sacrifice his son as an act of obedience to God. In Egypt, where the Conellys live, the first day of Eid will be on Friday.

Normally the family has a festive but laid-back routine for the first day of Eid. After Marwa Conelly returns home from the Eid prayer at the mosque, the family would breakfast and then nap before gathering again for more food and television.

There would be joking and teasing: Conelly, 30, would ask about her “Eidiya,” the cash gift traditionally handed out to kids during the holiday. Her mom would playfully tell her she was too old for that now, even though they still give her and her sister “Eidiya.”

This year she will miss all of it, even the battles over who washes the dishes, and is thinking of staying elsewhere.

Such struggles can ring true across faith communities.

“The holidays are a time we celebrate together and share our rituals and share our worship or our beliefs,” said David Kessler, author of “Finding Meaning: The Sixth Stage of Grief.” “And if your loved one has died, their absence is extremely loud during a holiday.”

In Iraq, Mohamed, who asked to be identified with just one name due to the sensitivity surrounding the virus, remembers planting kisses on his father’s head and hand on Eid as he wished him a happy holiday.

His father died in May. Hospitalized and under quarantine, Mohamed was unable to say goodbye or attend his burial, shortly before the Islamic holiday of Eid al-Fitr.

“Before, we felt joy during Eid,” he said. “Not anymore, not like before.”

For Eid al-Adha, Mohamed said, his family is thinking of baking date cookies — a favorite of his dad’s — to bring to the neighbors while asking them to pray for him.

“Since my father died, people have been too afraid to visit because of the coronavirus," he said.

Indeed, Kessler said fears of contagion have denied many families the support they could otherwise count on in times of bereavement.

“People who would usually be coming over and bringing casseroles and, you know, sitting at your kitchen table with you didn’t do that," he said.

Kessler, who in March launched an online grief support group that has attracted nearly 17,000 members, said religious and nonreligious holidays alike, from Easter and Passover to Mother's Day and Father's Day, have been “very, very intense” for the bereaved.

Besides the loss of loved ones, the pandemic has taken a toll on a sacred mainstay of Islam: the hajj pilgrimage, in which Muslims typically pour into Saudi Arabia before the start of Eid. One of the pillars of the faith, it is required once in the lifetime of each able Muslim, and many people around the globe spend years saving money to afford the journey.

This year the hajj is sharply curtailed due to the coronavirus, with only very limited numbers of those already residing in Saudi Arabia allowed to take part. In one of the rituals, the faithful circle the cube-shaped Kaaba building toward which Muslims around the world pray daily.

Heather Laird, president of the Center for Muslim Mental Health and Islamic Psychology in California, said the hajj has such deep spiritual meaning that losing access to it can be a cause for mourning.

She cried when she realized she would not be able to make the hajj this year as she had hoped, and wondered if she may never get another chance. She has asked someone close to her to pray with her that the virus is gone by next year.

“I’ve actually been wanting to go for several years,” she said. “I’m just hoping and praying that I have another opportunity.”

Some see in Eid a chance for spiritual succor as they remember those lost.

Mostafa Omar of Egypt said his mother had been looking forward to performing the ritual sacrifice of an animal to feed the needy this Eid. After she was felled by COVID-19, the family will carry out that wish.

“It gives me comfort to do what she wanted," Omar said, "to make her happy.”

And for Doaa el-Agoze, also in Egypt, it will be the first Eid without a cousin and an uncle lost to the virus and two other relatives who died of other causes. El-Agoze learned of her cousin’s death as she was fighting the virus herself and dealing with questions about her own mortality.

For her family, Eid is normally a boisterous affair full of food, chatter, laughter and music: “It feels like we all are kids still.”

She doesn’t know exactly what this Eid will be like, but she and others want to go to the cemetery to pray through masked mouths for their loved ones.

“We want them to know that even while they are not with us, we will not forget them and that we love them,” she said. “I pray that they are spending their Eid in heaven.”