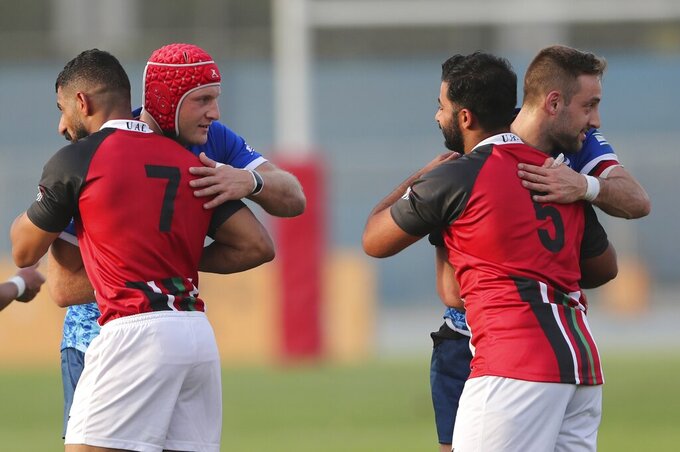 UAE and Israel rugby players celebrate with each other after a friendly match in Dubai, United Arab Emirates, Friday, March 19, 2021. (AP Photo/Kamran Jebreili)

DUBAI, United Arab Emirates (AP) — In the Middle East, where sport and diplomacy are closely intertwined, political passions can spill over onto the playing field.

With the Palestinian cause the core issue uniting Arabs across the region for decades, Israeli players meeting Arab opponents on the field have learned the age-old conflict always looms. Spectators have thrown shoes and jeered. Egyptians, Saudis and others have refused handshakes or pulled out of matches.

But on Friday, politics played a vastly different role. Months after the United Arab Emirates normalized ties with Israel, an Israeli national rugby squad touched down in Dubai to meet the Emirati team on the field for the first time. The more experienced Israeli team swiftly beat the UAE 33-0 in the first 7-a-side friendly match, held without crowds because of the coronavirus pandemic.

The rugby players and few spectators rose as Hatikvah, the Israeli national anthem, blared over the grassy field and through rows of skyscrapers. The players shook hands, slapped backs and bumped fists over a thumping electronic beat.

Emirati players seemed uncomfortable only when asked about the Israeli-Palestinian conflict. While the UAE and Israel were never at war and for years cultivated covert ties, the federation of seven sheikhdoms formally considered Israel an enemy.

Following the establishment of formal ties last year, the public blowback in the UAE has been muted if not absent, as authorities suppress all dissent. Palestinians, for their part, have lambasted the Israel-UAE normalization as a betrayal of their cause for statehood.

“We don’t think about whether Israel is a good country or a bad country,” said Ibrahim Doree, an Emirati player, his face glistening with sweat after the game. “We just follow our leaders,” he added, declining to discuss the conflict before rushing to meet the Israelis for a barbecue dinner in the desert.

The Israelis were more emotional. Israeli President Reuven Rivlin beamed onto the field with a dramatic speech about friendship.

“This is insane, insane,” said Israeli player Ori Abutbul, shaking his head in disbelief. “I have no words when people ask me how I feel.”

Already, sport has become key to new Israeli-Emirati ties. Hamad bin Khalifa Al Nahyan, a member of the Abu Dhabi ruling family, purchased a 50% stake in Beitar Jerusalem, a club notorious for its racist fan base and refusal to have an Arab player on its roster. However, reports questioning the sheikh’s finances have since put the deal on hold.

Signs of friction have emerged in the countries’ diplomatic relations, too, with the UAE resisting Israeli Prime Minister Benjamin Netanyahu’s attempts to entangle the country in his campaign for re-election.

But on the field Friday, Emirati team captain Younes al-Blooshi said he didn't want to talk about the region's political intrigues and rivalries. He expressed relief, however, that certain old rifts were beginning to heal. Earlier this year, the UAE, Saudi Arabia and other Arab countries announced the end to a yearslong boycott of Qatar.

Throughout the bitter dispute, the UAE rugby team played in Qatar, but “it was pretty difficult,” al-Blooshi acknowledged, declining to elaborate.

“Thankfully, things are all clear now,” he said, noting the team would be flying direct to Doha in May, a first since 2017 when the boycott closed borders.

Israel, meanwhile, will return to competing against European countries, with the 2021 European Rugby Championship Cup beginning next month.