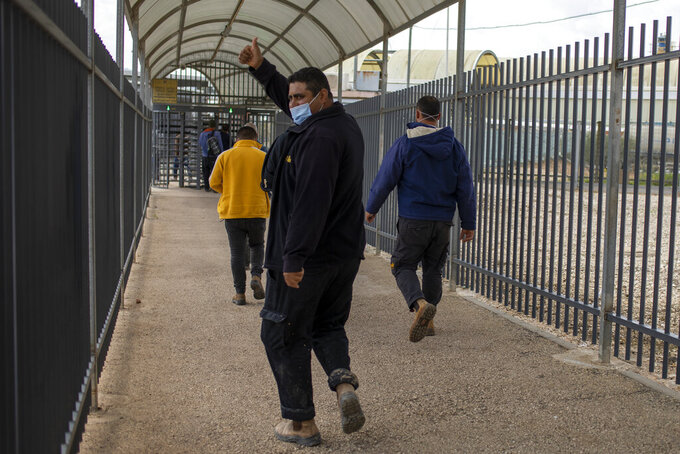 A Palestinian laborer who works in Israel gives the thumbs up after receiving his first dose of the Moderna COVID-19 vaccine at a coronavirus vaccination center set up at the Gilboa checkpoint crossing between Israel and the West Bank city of Jenin, Monday, March 8, 2021. (AP Photo/Ariel Schalit)

There was no indication the two events were coordinated, but their split-screen quality offered a stark contrast between Israel's world-leading vaccination blitz and the plight of 5 million Palestinians in the West Bank and Gaza Strip. Progress in places like Israel, the United States and Britain has heightened concerns among human rights advocates of driving a wider gap between wealthy countries and those that can't afford pricey vaccination programs.

Until Monday, the Palestinian Authority, which administers autonomous areas of the Israeli-occupied West Bank, had received enough doses for only 6,000 people.

Israel has inoculated more than half its population of 9.3 million and pushed ahead Monday with the reopening of more of its economy. Prime Minister Benjamin Netanyahu, facing re-election this month, promised to vaccinate the entire adult population by the end of April, which he said would mean “we are out of the corona crisis.”

He appeared at a press conference in Tel Aviv with Janet Lavi-Azulay, an Israeli woman who became the 5 millionth person in Israel to be vaccinated. In all, Israel has vaccinated roughly 80% of its adult population, giving decision makers enough confidence to begin reopening stores, restaurants, health clubs and music clubs in recent days. Many of these amenities are available only to those who can prove they have been vaccinated or have recovered from the virus.

About 100 kilometers (60 miles) southeast, Anwar Muhammad Awarin got his jab and showed a text on his cell phone certifying the inoculation. For him and other Palestinian workers, it was less about celebrating and more about survival.

According to COGAT, the Israeli defense agency that orchestrated the vaccine campaign, the workers are not required to be vaccinated in order to keep their entry permits at the current time. But many laborers said their Israeli employers have pressured them to be vaccinated, and there were widespread concerns they could lose their jobs if they do not get inoculated.

Awarin was one of some 6,000 Palestinian laborers who received their first doses of the Moderna vaccine from paramedics from the Israeli rescue service Magen David Adom.

The vaccination drive was postponed by one day. More vaccination sites for Palestinian workers were expected to open this week.

About 100,000 Palestinian laborers from the West Bank work in Israel and its settlements, which are widely seen internationally as illegal and an obstacle to peace.

Maj. Gen. Kamil Abu Rukun, the head of COGAT, said in a statement that Israelis and Palestinians “live in the same epidemiological space” and that it was a shared interest to vaccinate Palestinians.

Israel has won international plaudits for moving quickly to vaccinate its population. But it has come under criticism from U.N. officials, human rights groups and medical experts for not sharing more of its stockpile with the Palestinians.

Human rights groups and many Palestinians say that as an occupying power, Israel is responsible for providing vaccines to the Palestinians. Israel says that under interim peace accords reached in the 1990s, it does not have any such obligation.

Israeli officials have said the priority is vaccinating Israel’s own population first, while the Palestinian Authority has said it will obtain its own vaccines through the World Health Organization and other sources. Israel has vaccinated its own Arab population.

To date, the PA has acquired enough vaccine doses for only 6,000 people in the West Bank and the Gaza Strip, which are home to nearly 5 million Palestinians. It received 2,000 doses from Israel and acquired another 10,000 doses of a Russian-made vaccine. Each person is given in two doses to be fully vaccinated.

Israel has administered over 8.7 million doses of the Pfizer vaccine to its population of 9.3 million. Over 3.7 million Israelis — more than 40% — have received both of the doses required for maximum immunity.

Netanyahu also announced plans to share surplus vaccines with far-flung allies in Africa, Europe and Latin America, but the decision has been frozen by legal questions. Last Thursday, Netanyahu met with leaders of Denmark and Austria and said the three nations would join forces in the fight against COVID-19 with an investment in research and roll-out of vaccines.

This story was first published on March 8, 2021. It was updated on March 9, 2021, to make clear that Israel does not require Palestinian laborers to be vaccinated, though many workers say their employers want them to do so.