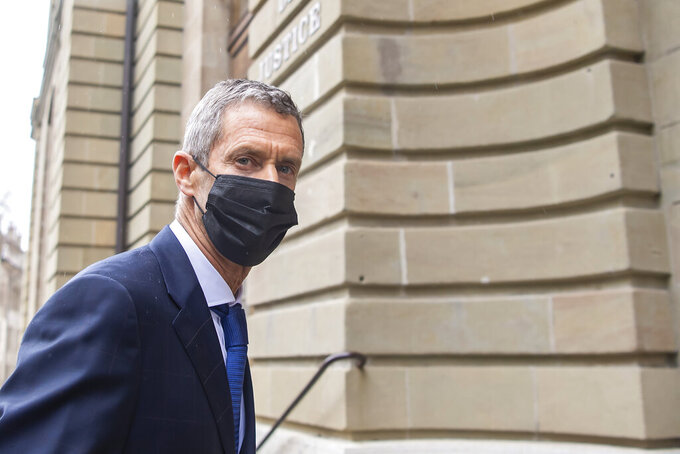 Israeli businessman and diamond-magnate, Beny Steinmetz, arrives to Geneva's courthouse for the reading of his verdict for alleged corruption of Guinean public officials and forgery documents, in Geneva, Switzerland, Friday, Jan. 22, 2021. (Martial Trezzini/Keystone via AP)

GENEVA (AP) — A Geneva court on Friday convicted Israeli diamond magnate Beny Steinmetz on charges of corrupting foreign public officials and forging documents, in a trial over his successful bid to reap lavish iron ore resources in the Guinea.

The man considered by some to be Israeli's richest man was sentenced to five years in prison, after facing a maximum of 10 years in the case.

Steinmetz, who was on trial with two other defendants who received lesser penalties, was ordered to pay a 50-million-Swiss franc ($56.5 million) fine.

His defense lawyer, Marc Bonnant, said he would “immediately” appeal the court ruling.

The case centered on alleged payouts of millions to a former wife of late President Lansana Conte, and exposed the shady and complex world of deal-making and cutthroat competition in the lucrative mining business.

Before the proceedings, Bonnant said his client had not given “a single dollar” to any official of the Guinea regime under Conte — but the court was not convinced by the top-drawer Geneva lawyer's arguments.

“This conviction of a high-profile business figure not only sends a strong signal to the commodities sector as a whole, but also demonstrates the vital need for Switzerland to finally remedy the legal loopholes that allow such predatory practices,” it said.

“Public Eye commends the determination of the Geneva court, which refused to be fooled by the smoke and mirrors and evasion tactics of the defense team, no matter how slick," it added.

Wearing a mask and flanked by his lawyers, Steinmetz — who has French and Israeli citizenship — calmly listened and jotted down notes as the judge, Alexandra Banna, read the facts of the case and the verdict over two hours. Attendance in the Geneva courtroom was limited due to COVID-19 concerns.

The Geneva prosecutor’s office alleged that Steinmetz and two other defendants engaged in corruption of foreign officials and falsification of documents to hide from authorities and banks the paying of bribes. Some of the funds allegedly transited through Switzerland — and the case has been investigated in Europe, Africa and the United States.

The prosecutor’s office said Steinmetz, starting in 2005, crafted a pact of corruption with Conte, who ruled the West African country from 1984 until his death in 2008, and his fourth wife, Mamadie Toure, involving the payment of nearly $10 million.

In its court filing, the prosecutor’s office said BSGR won exploration and exploitation licenses in Guinea between 2006 and 2010 in the Simandou region, and its competitor — Anglo-Australian mining group Rio Tinto — was “deprived between July and December 2008 of concessions it had up to then held in the Simandou North blocs 1 and 2.”

Public Eye, the transparency group, said Steinmetz employed “opaque structures” to hide the allegedly corrupt schemes that were managed from Geneva, where he lived until 2016.

The group said the case showed how tax havens can be used to conceal questionable, “even illegal” activities in countries with weak governance and regulation.

An earlier version of this story incorrectly stated the fine as being $50 million. It was 50 million Swiss francs ($56.5 million)