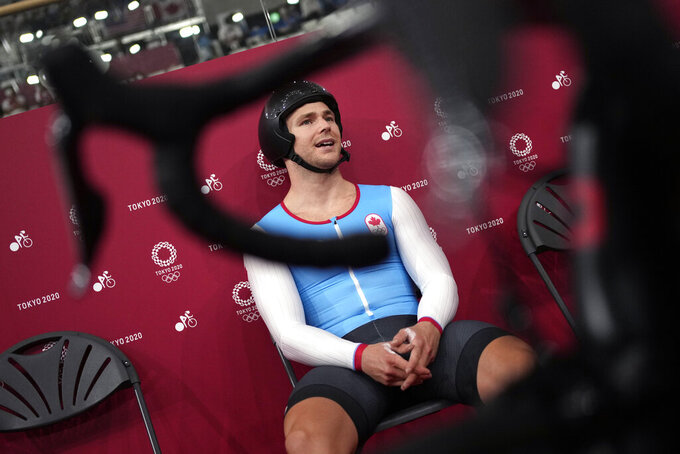 IZU, Japan (AP) — Filippo Ganna warned his teammates on the Italian team pursuit squad not to celebrate too much after setting a world record in reaching the Olympic finals, knowing full well that they still needed to race Denmark for gold.

Well, they can have a proper party now.

The squad of Ganna, Simone Consonni, Francesco Lamon and Jonathan Milan overcame a nearly half-second deficit over the final five laps of the 16-lap race to beat the reigning world champions by the slimmest of margins.

“We are so happy for this gold medal and so happy for this world record,” said Ganna, whose massive turn at the front allowed Italy to make up its deficit. “We have a beautiful team, like a family, so for me and us, it means a lot.”

As for the Danes? Total disappointment.

Australia, the silver medalist in Rio, took the bronze. The Aussies were in a tight race with New Zealand before a touch of wheels sent one of the Kiwi riders to the ground and effectively eliminated them from contention.

The men's team pursuit has been engulfed in controversy ever since the Danes stepped on the track for qualifying.

After setting an Olympic record with their ride, the British joined several other teams in lodging a protest over kinesiology tape that Denmark wore on their shins and aerodynamic vests under their jerseys. The tape in theory would disrupt air flow and give them an advantage while the Brits claimed the vests were not publicly available when they needed to be.

Denmark, which said it had gotten permission to use the tape, did not wear it for the rest of the rounds.

But their spot in the final was still put in jeopardy when the Danes faced three-time defending champion Britain in their heat. Denmark was so far ahead just after the halfway point that its leading rider, Frederik Madsen, collided with the trailing British rider, Charlie Tanfield, sending both to the ground and nearly touching off a fight.

Even though Madsen was at fault, officials declared that Denmark had caught Britain and effectively won the race.

“I was just frustrated at the situation,” Madsen said, “not at him, because he was doing his job and I was doing my job.”

The team of Madsen, Hansen, Niklas Larsen and Rasmus Pedersen trailed the first half of their final against Italy before pulling ahead, eventually building a half-second lead with 1,250 meters left in the 4,000-meter race.

But with Ganna pulling hard at the front, the Italians closed a deficit of 55 thousandths of a second on the last lap to win the first gold medal for their country in the men's team pursuit since the 1960 Rome Olympics.

The start of the women's keirin also carried with it a hint of controversy.

Earlier in the program, the duo of Bao Shanju and Zhong Tianshi wore pin badges of Communist China's founding leader, Mao Zedong, after winning the team sprint gold medal. The IOC said Tuesday it was “looking into the matter” because the pins could be viewed as a breach of Olympic rules that prohibit political statements on the podium.

Bao and Zhong were back in action for the keirin, a discipline where riders followed a motorized bike called a derny as it slowly picks up speed, then they sprint for the finish line when the pacer ducks off the track.

Zhong was third in her heat, but advanced to Thursday's quarterfinals when Britain's Katy Marchant was relegated. Bao was fourth in her heat and was eliminated when she finished last in her repechage.

Marchant survived her repechage. So did Germany's Emma Hinze, the reigning world champion.

The men's sprint also got started with qualifying, where Dutch teammates Jeffrey Hoogland and Harrie Lavreysen tied for the Olympic record in 9.215 seconds, and the opening match races that began to whittle down the field.

Most of the heavy hitters advanced in the competition, including Jason Kenny, who is trying to break a tie with Chris Hoy for the most gold medals among Brits with his seventh. Kenny has won the past two Olympic finals.

“I've been struggling a bit. I just felt like every ride was a final,” Kenny said. “That's it, really. Job's done for today. Go get fueled up a bit and hopefully have another good day tomorrow.”