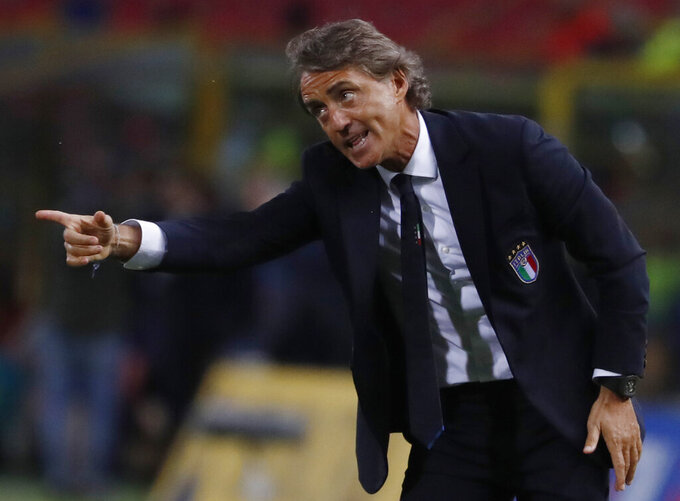 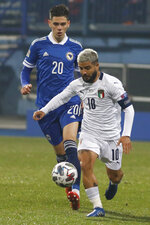 The Italy players yelped in delight as they celebrated in Sarajevo after securing a spot in the final four of the Nations League, despite coach Robert Mancini self-isolating in Rome after testing positive for the coronavirus.

A member of his staff held up a phone and, via video chat, Mancini congratulated the players for the 2-0 win in Bosnia-Herzegovina. That was met by raucous cheers from the excited players.

Contrast that with the scenes in 2017 when the players slumped to the ground in disbelief after losing to Sweden in the playoffs and failing to qualify for the World Cup.

Gian Piero Ventura was fired as coach after that match and Mancini replaced him a few months later.

“I can only thank all the lads and the staff,” Mancini said in a television interview via webcam after the match. “The guys that were there today and also the guys that weren’t, that like me had to stay at home, that contributed to arrive at this point.

“In two years they have done really great work and they have been fantastic.”

Mancini has turned things around by focusing on tactics and style of play. Italy’s free-flowing system is in contrast to the soccer the team played during Ventura’s tenure and even had one commentator on Wednesday enthusiastically exclaiming “it’s like watching Brazil.”

“Since we rarely see each other, we only work on tactics and technique when we train and not on fitness because they arrive already having done that with their clubs,” Mancini said.

“It’s going well but they are the ones to congratulate for that because it’s not easy. We’re trying to focus on that but we mustn’t forget that Italy won four World Cups playing in a different way. But soccer has changed now.”

His players feel he is being too modest, especially since he is getting the best out of several who failed to shine under Ventura.

Lorenzo Insigne became one of the examples of Ventura’s failings when the Napoli winger inexplicably played only 15 minutes of the two-leg playoff, and out of position.

The 29-year-old Insigne was one of Italy’s best players against Bosnia and was unfortunate not to cap a stellar performance with a goal following a fantastic first touch and finish which skimmed the outside of the post.

“The coach wants us to play our soccer wherever we go and that is the mentality we’ve really embraced. He’s helping us grow,” Insigne said. “Here in the national team, all the staff are putting us in the right condition for us each to get the best out of ourselves. We’re committed to that because we want to take Italy back to the top where it deserves to be.”

Italy’s performance against Bosnia — and against Poland and Estonia last week — was all the more impressive given the problems it has had over the past week. More than 20 players from the initial squad were unavailable because of the virus and injury.

But throughout Mancini’s time as coach he has combined being able to get the best out of the already-established players and bringing through youngsters who have rejuvenated the squad with fresh energy and enthusiasm.

That means Mancini will have a deep pool to choose from for the three tournaments coming up in an 18-month period.

The Nations League Final Four will take place in Italy in October, with the matches likely being held in Milan and Turin. And that will come shortly after the rearranged European Championship and a year before the 2022 World Cup.

“In the last four-five months several more young players have come through and they are proving themselves to be great players,” Mancini said. “That’s good thinking about the World Cup, but choosing the group for the Euros will be a big problem.

“It was already hard enough before ... But it’s better to have that problem than not to have it.”