Its $11M makeover complete, the Mayflower II is sailing home 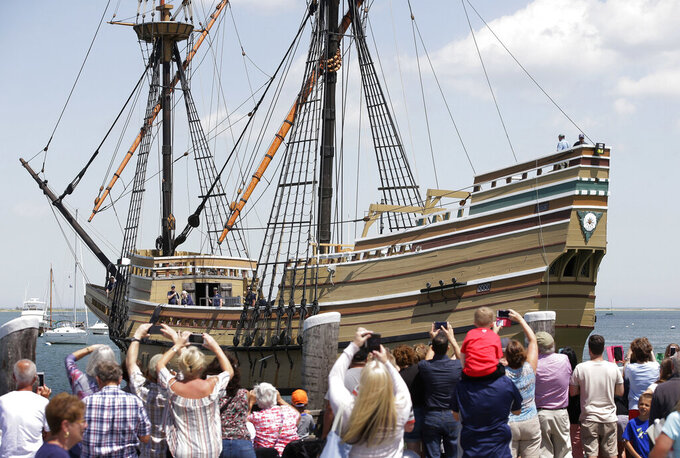 FILE - In this June 6, 2016 file photo, people on a wharf watch as the Mayflower II arrives in Plymouth Harbor in Plymouth, Mass. After undergoing more than three years of major renovations at Connecticut's Mystic Seaport and months of delays due to the COVID-19 pandemic, the replica of the Mayflower is is set to leave Mystic Seaport on Monday, July 20, 202 for a sea trials in New London, before sailing up the coast and arriving at Plimoth Plantation in Massachusetts on during the second week of August. (AP Photo/Steven Senne, File)

Cue the cameras: The Mayflower II is ready for its closeup and its journey home.

The replica of the original Mayflower ship that brought the Pilgrims to Plymouth, Massachusetts, in 1620 is preparing to embark from Connecticut after three years' and $11.2 million worth of renovations — and several months of delays caused by the COVID-19 pandemic.

The beloved vessel is scheduled to be towed from the preservation shipyard at the Mystic Seaport Museum to New London, Connecticut, on Monday for two weeks of sea trials before heading up the coast.

The 64-year-old historic reproduction is scheduled arrive back at the harbor just down the road from the Plimoth Plantation living history museum on or around Aug. 10.

The original plan had called for a celebratory departure in late April with several stops at southern New England ports before a May arrival. That was to include being led into Boston Harbor under sail with the USS Constitution for a maritime festival to mark the 400th anniversary of the original Mayflower voyage.

But those plans were scrapped because of the pandemic.

The ship is now planning to make two overnight stops, without fanfare or crowds. The public can follow the trip online.

“Our goal is to keep the crew as isolated as possible,” said Kate Sheehan, a spokesperson for Plimoth Plantation. “So the public will not be able to board the ship at any point during the journey. We're just being very, very careful about the crew's exposure.”

The Mayflower II has been a major tourist attraction and educational tool since it arrived in Plymouth as a gift from England in 1957.

Stabilization efforts began in 2014, with the ship spending part of the year in Mystic. Continuous restoration work began at the seaport museum in 2016, with shipwrights from the seaport museum and artisans from Plimoth Plantation engaged in the work.

The ship's keel was saved, but nearly 75% of the vessel is new, Sheehan said.

“The hull planking was completely replaced with 20,000 board feet of Danish white oak that is absolutely some of the most beautiful wood that I have ever seen and the shipwrights have ever seen,” she said.

Since being rechristened in 2019, craftsmen have been doing painting, rigging, finishing work and installing new features such as a state-of-the-art fire suppression system on board.

Plans for the Mayflower II to take part in tall ship celebrations and other sails — including a 400th anniversary commemoration in Provincetown, Massachusetts, in September — have been put on hold.

For at least the remainder of this year, the ship will be docked at Pilgrim Memorial State Park, Sheehan said.

“To the extent that it’s possible to mark her arrival with any sort of event, then we will do so,” she said.

“Even under the most mundane of circumstances, Mayflower tends to attract a crowd, so even if a crowd gathers organically, we'll communicate that they need to follow the state's safety guidelines regarding physical distancing and mask wearing.”