"It's about results": Coburn takes no solace after bad race 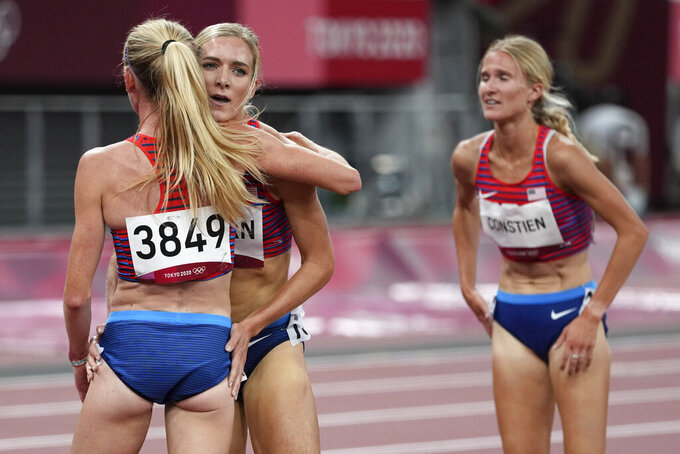 Courtney Frerichs, left, of the United States, is congratulated by teammates Emma Coburn, and Valerie Constien, right, after the final of the women's 3,000-meters steeplechase at the 2020 Summer Olympics, Wednesday, Aug. 4, 2021, in Tokyo. (AP Photo/Matthias Schrader)

TOKYO (AP) — So much of these Olympics have been filled with stories about how results and medals aren't always as important as the difficult journey to get this far.

That is not the story of Emma Coburn.

America's preeminent steeplechaser for the past decade flamed out Wednesday night in a final that was as stunning for her as it was thrilling for her U.S. teammate, second-place finisher Courtney Frerichs.

Coburn crossed the line in 14th place, then found out later that she had been disqualified because she stepped off the track after a last-lap stumble over the barrier.

“It sucks to suck on the biggest stage,” Coburn said.

To her, it was as inexplicable as it was unacceptable.

She has spent the past 10 years perfecting a craft that once had very little to do with Americans on the international stage but now very much does. Coburn won bronze at the last Olympics, gold and silver at the last two world championships. She has won the U.S. championship in nine of the last 10 years.

She came to Tokyo not so much hoping for, but expecting, to bring home a medal.

As has played out time and again on the Olympic stage, the trip, the pressure, the yearlong delay caused by COVID-19, to say nothing of the searing pressure that accompanies big expectations, are all valid reasons to focus more on an athlete's journey than the result.

But as Coburn stood there, chewing gum, hand on her hip, attempting to process her disappointment, she was having none of that. No, she said, steeplechase does not define her as a person. But it is what she does for a living.

“We're professional athletes,” she said. “Obviously, everyone has their own experiences. But for me, it’s about results and it’s about everyone in my life. I've got my teammates, my husband, my sponsors, my friends, everyone in my life gives everything to me. So the journey is important and we’re going to enjoy the journey. But when you suck, like, that’s not part of this journey.”

Possibly the most frustrating part for Coburn is that she could not see it coming. Sure, she said, during warmups and in qualifying, she felt little nicks and twinges, but nothing she hadn't dealt with before.

“I walked on that starting line thinking I was coming home with an Olympic medal,” she said.

Almost from the start, this race did not go to plan.

It didn't help that the field got strung out early, with Coburn hanging around in a second pack behind Frerichs, who began to open a massive gap. With a lap to go, Peruth Chemutai, the first female from Uganda to win an Olympic gold medal, joined, and eventually passed, the American.

It was a two-woman race. Coburn was nowhere near it.

“I should have been perfect today,” she said. "I should have been excellent. And I wasn’t. And I don’t think there’s anything we could have done differently in practice to make today less of a disaster. Which is upsetting.”

It felt like the tiniest of victories, Coburn said, that she was able to finish the last two laps when her body felt a way it hadn't felt in years. For some, fighting through that agony might have been a victory of sorts.

Injuries happen, “and it's heartbreaking,” she said.

"And obviously we’re seeing a lot of mental-health issues. But for me to come here, to be physically really prepared, and to suffer like I did, is not why my 20 closest friends and family have been supporting me for the last five years. It's not what I'm capable of. I know I need to do better.”