It's Navy's badger statue, but Wisconsin has grown attached 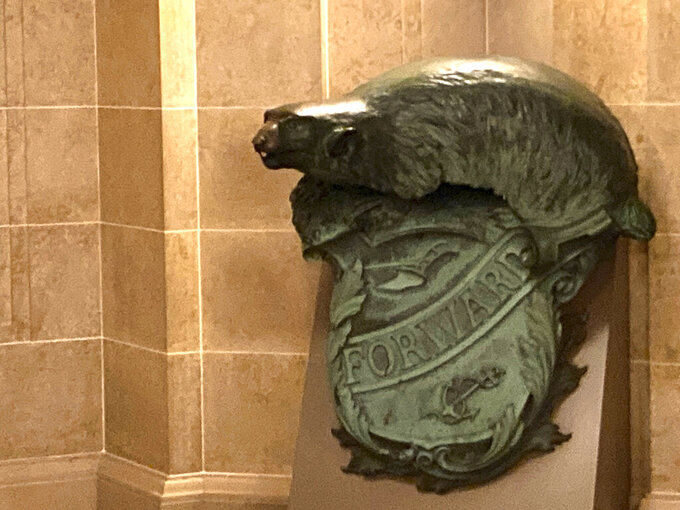 A Badger and Shield statue is seen outside the governor's Capitol office in Madison, Wis., Wednesday, Jan. 27, 2021. On loan for more than 30 years, the U.S. Naval Academy wants the state of Wisconsin to return the statue. The Navy wants to include it in an exhibit featuring the USS Wisconsin battleship in Norfolk, Va. State historians are fighting to keep the statue in the state for another two years. (AP Photo/Todd Richmond)

MADISON, Wis. (AP) — The Wisconsin badger statue that has served as a literal touchstone for so many Capitol building visitors that they've rubbed the finish off his nose could be headed to another den soon.

Navy officials want the statue they loaned to the state more than 30 years ago back. But state historians aren't letting it go without a fight.

The badger is synonymous with Wisconsin. It was selected as the state's official animal because lead miners in the state's early days were said to burrow into the ground like badgers. The University of Wisconsin-Madison's athletic teams are known as the Badgers, the school's mascot is a sassy badger named Bucky and an image of a badger adorns the state flag (although he looks more like a short-tailed beaver than a badger to the untrained eye).

Replicas of badgers can be found throughout the state Capitol. But the Badger and Shield statue holds a special place of honor outside the governor's office.

The statue was crafted around 1899 from melted-down cannons taken from Cuba during the Spanish-American War, according to online travel guide Atlas Obscura. It was affixed to the USS Wisconsin battleship before World War I.

It spent more than 60 years in a U.S. Naval Academy garden before the academy museum loaned it to Wisconsin in 1988 for a state historical society exhibition that coincided with the recommissioning of the second USS Wisconsin, which was built in Philadelphia. After the exhibition ended, the statue was put outside the governor's Capitol office in 1989. It has stood there ever since.

The building has been closed to the public for nearly a year because of the coronavirus pandemic, but the statue has been a highlight of tours in recent years, with throngs of adults and children rubbing its nose for good luck. So many people have touched the nose that its bright brassy gleam stands in sharp contrast to the rest of the statue.

State Department of Administration officials said the naval academy's museum contacted them last March about returning the statue so that it could be displayed at the Nauticus Museum in Norfolk, Virginia, where the second USS Wisconsin is now an exhibit. The Nauticus Museum is run by a nonprofit, not the Navy. Messages left at the museum weren't returned.

The naval academy museum extended the loan through mid-September due to COVID-19-related closures. Christian Overland, the head of the Wisconsin Historical Society, wrote a letter to Claude Berube, the naval academy museum's director, in October asking for a two-year extension on the loan.

Overland said the pandemic has driven up shipping costs and that the society uses the statue to help tell Wisconsin children about the state's ship-making history and its role in Great Lakes commerce.

“The children on the tours become very engaged and excited to learn more about the history of the ship industry in our state and in their communities,” Overland wrote. “It would be wonderful to continue telling and sharing stories of the U.S.S. Wisconsin and waterway history of our great state as we keep moving forward.”

State Department of Administration spokeswoman Molly Vidal said that as of Monday, the state hadn't heard back from the museum about extending the loan.

Berube said in a phone interview Thursday that he never received the letter, but that the museum has to take back the statue. He noted that the original loan was for five years and has been repeatedly extended to more than 30 years.

Berube said permanent loans no longer exist in the museum industry, and though he understands how Wisconsin feels, it’s now another organization’s turn to benefit from displaying the badger. He also noted that the academy museum had to return former President Jimmy Carter's plebe uniform to his museum in 2019.

“Loans are done in good faith,” he said. “I think it's great that children have been able to see this badger while it was on loan. Now we're trying to accommodate another facility that has also requested it. There will be a lot of children in the Norfolk area who will be able to enjoy it as well.”