It's not just GameStop worrying Wall Street about a bubble 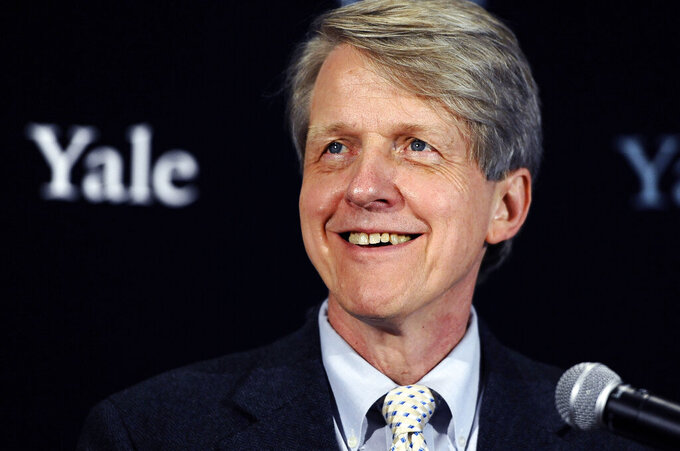 FILE - In this Oct. 14, 2013 file photo, Nobel prize-winning Yale University economist Robert Shiller smiles at a news conference in New Haven, Conn. Now, even the pros on Wall Street are asking if stock prices have shot too high. The U.S. stock market has been on a nearly nonstop rip higher since March 2020, surging roughly 70% to record heights. “You might say a bubble occurs when people think that the market is going to go up but worry that it may drop,” said Shiller (AP Photo/Jessica Hill, File)

NEW YORK (AP) — Now, even the pros on Wall Street are asking if the stock market has shot too high.

U.S. stocks have been on a nearly nonstop rip higher since March, up roughly 70% to record heights and causing outsiders to say the market had lost touch with the pandemic's reality. But Wall Street kept justifying the gains by pointing to massive support from the Federal Reserve, lifesaving deliverance from COVID-19 vaccines and efforts by Congress to pump more stimulus into the economy.

Recently, though, some of the market's action has become tougher to explain, and not just the maniacal moves for GameStop. Some investors are so hungry for huge payoffs that they're pouring into investments without knowing what their dollars will go toward. And by some measures, the broad stock market looks more expensive than it did before the 1929 crash.

All the fervor has Wall Street openly debating whether the market is in a dangerous bubble, after months of batting away the possibility.

A bubble is what happens when prices for something run much, much higher than they should rationally be: They've been a regular occurrence through history, going back to tulips in the 17th century and pets.com at the close of the 20th.

“It is a privilege as a market historian to experience a major stock bubble once again,” the famed value investor Jeremy Grantham, who has correctly called several major market turning points, wrote in a recent paper. “Japan in 1989, the 2000 Tech bubble, the 2008 housing and mortgage crisis, and now the current bubble – these are the four most significant and gripping investment events of my life.”

To be sure, most professional forecasters say the U.S. stock market is not headed for a crash, just slower returns than before. But those optimists are having to do more work convincing others.

“You might say a bubble occurs when people think that the market is going to go up but worry that it may drop,” said Robert Shiller, a Yale professor who won a Nobel prize for his work on explaining stock price movements. “That is where we are.”

He said the market looks vulnerable, but he cautioned that some hallmarks of a classic bubble aren't present today, such as investors talking about a “new era” for the economy. He also said that it's difficult to predict when the market will run out of momentum and turn lower.

“People often extrapolate trends, and they go on longer than you ever think,” he said. “And then they disappear.”

Here's a look at the causes for concern driving the bubble debate:

— The most glaring example of excess sweeping Wall Street now is GameStop's stock, which soared 1,625% in January. Shares of the struggling video game retailer have since fallen, but they remain way beyond a price Wall Street analysts say is rational based on its profit prospects. Other money-losing companies have surged as well, showing how easily some investors are pushing up prices for an investment, despite its risks. And with smaller investors driving much of the action, experts are making comparisons to the shoeshine worker giving stock tips in 1929.

NO DISCOUNTS TO BE FOUND

— Perhaps more worrisome is that prices have been soaring across the stock market at a much faster pace than corporate profits. The two tend to track each other over the long term, so big dissociations give pause. One measure popularized by Yale's Shiller looks at the S&P 500's price against profits produced by companies in the prior 10 years, adjusted for inflation. Since 1881, only once has it been more expensive than it is now — during the dot-com bubble. It came close just before the crash that helped usher in the Great Depression.

— Massive support from the Federal Reserve means dollars are sloshing around markets looking for investments, and young and money-losing companies are rushing to take advantage by selling their stock to the public for the first time. Companies raised more than $60 billion last year through IPOs of their stock, the most since the dot-com bubble peaked in 2000, according to data compiled by Jay Ritter at the University of Florida. Within tech companies, only 19% of IPOs were for profitable companies last year, compared with the more typical 49% of the last two decades.

— The fervor to invest in the next hot young company is so voracious that some CEOs are skipping the IPO step altogether. Instead, they're selling themselves to companies armed with cash by investors and tasked to find young businesses that don't yet have shares trading in the public market. Such special purpose acquisition companies, or SPACs, have exploded in popularity. Last year, SPACs raised $76 billion from investors, up from $13 billion a year before. In the first three weeks of 2021, they raised another $16 billion, according to Goldman Sachs.

For all the worries, much of Wall Street is still optimistic, forecasting more gains ahead.

COVID-19 vaccines have raised expectations that daily life will get closer to normal this year and return the economy to health. If earnings rise a lot and stock prices make only modest moves, prices would look more reasonable, and that's precisely what much of Wall Street expects to happen.

Back in early 2018, the market was in the midst of a long and powerful run, and the S&P 500 was nearly as expensive as it is now by some measures, prompting talk of a bubble. The bull market powered on, however, right up until the pandemic hit.

Then, there's the Fed. Past bubbles have popped after the Federal Reserve started raising interest rates in hopes of cooling off an overheated economy or markets. For now, the Fed seems to be years away from doing that. It's even said for the first time that it's willing to keep rates low for a while after inflation tops its 2% target.

With rates so low, investors don’t have much choice for good returns outside of stocks.

Margie Patel, senior portfolio manager at Wells Fargo Asset Management, said the Fed has pretty much signaled to Wall Street that it won't allow for a big market downturn.

"As long as interest rates are this low,” she said, "it’s really hard for me to see how you could have much of a correction in stocks.”