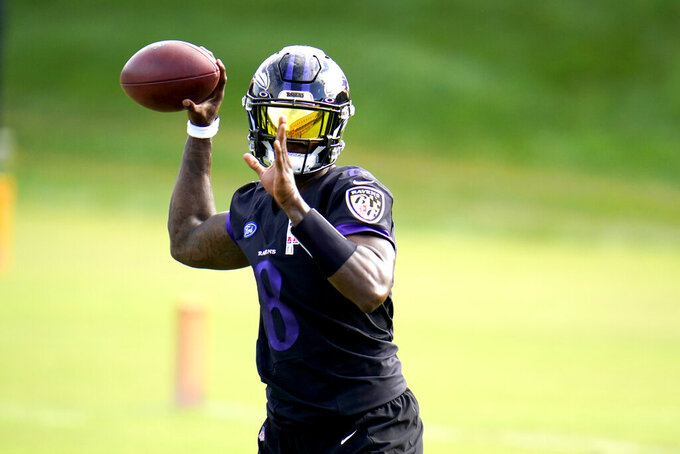 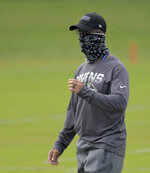 The Baltimore Ravens put together a storybook regular season in 2019, using dynamic quarterback Lamar Jackson to set several NFL marks and win the AFC North with the best record in franchise history.

Their goal this season is to duplicate that success, and attach to it an alternate ending.

The Ravens went 14-2 last year, winning their final 12 games to enter the postseason as the top seed in the AFC. Jackson was the NFL MVP after setting a league record for yards rushing by a quarterback with 1,206, part of Baltimore's record-breaking 3,296 yards on the ground.

Those gaudy numbers were, unfortunately, the only positive takeaways from a season that ended with a deeply disappointing 28-12 loss to Tennessee in Baltimore's playoff opener.

The resulting mix just might erase the sting of that loss to the Titans.

“That’s the goal — to have a better season than we did last year. We didn’t finish how we wanted. We wanted to be champions," Ingram said. “That’s the standard here. Nothing less."

For a team to get to the Super Bowl, solid coaching and standout players are a must. Chemistry is also a factor, which is why the Ravens were willing to cut loose seven-time Pro Bowl safety Earl Thomas after he became involved in a fight during practice and was detracting from the feel-good vibe in the locker room.

Jackson had a breakout season in his first full year as a starter, running wild and throwing for 3,127 yards and 36 touchdowns.

Not too shabby, but the third-year quarterback and the Ravens know there's room for improvement, especially in the passing game.

“You talk about Brett Favre and Joe Montana and those guys, it's always (about) putting more tricks in your bag," Ravens quarterback coach James Urban said. “We're never going to lose the ability for him to take the ball and run, like he does, and that great natural ability. But we do want to improve the pocket passing consistency."

Jackson knows he has a reliable target in tight end Mark Andrews, who led the Ravens last year in catches, yards receiving and touchdown catches. The plan is to make wideouts Marquise Brown, Willie Snead and Duvernay a bigger part of the mix.

“We’re building a lot," Jackson said. “We’re doing a lot better than we were last year, especially at deep passes."

It's didn't take long for the hulking 6-foot-8, 300-pound Campbell to make a big impression on his coach and new teammates.

“He's a great leader," coach John Harbaugh said of the five-time Pro Bowl lineman. “But you know the thing about these guys is — you don’t realize it until you stand there on the field — how big they are. Calais looks big."

Campbell will be a huge part of the run defense, but he can also get after the quarterback. He totaled 30 1/2 sacks over the past three years with Jacksonville.

The Ravens had a trio of solid running backs last year, with Ingram rushing for 1,018 yards, Gus Edwards accounting for 711 and Justice Hill adding 225 and a pair of scores as a rookie.

Dobbins, a star at Ohio State, provides Harbaugh with a fourth option.

“He’s going to get an opportunity to play, for sure," Harbaugh said. “I like everything we’ve seen so far. It’s just camp, but he has certainly lived up to expectations.”

It's tough to replace a standout guard such as Marshal Yanda, who retired this past offseason, but DeCosta took a stab at it by signing free agent guard D.J. Fluker.

Fluker has seven years of experience, but there's no substitute for Yanda in terms of execution and leadership.

“What Marshal did here, it’s going to be so hard to replicate," tackle Orlando Brown Jr. said. “He was just so important and so special to our offensive line room, as well as the franchise."

The Ravens had only two players opt out because of the coronavirus pandemic, kick returner De’Anthony Thomas and reserve offensive tackle Andre Smith.

There won't be any fans at home games for the initial part of the season, which means the Ravens lose the advantage of having 70,000 fans offering their support and making enough noise to rattle opposing offenses at the line.

“It's going to a different vibe," linebacker Tyus Bowser said.