Jackson headed to Olympics after Bowe gives up 500 spot 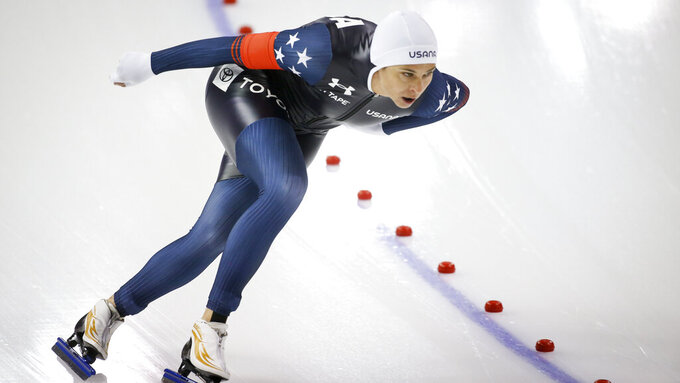 Brittany Bowe didn't want to go to her third and likely final Olympics without Erin Jackson.

So after Jackson slipped and didn't qualify in the 500 meters at the U.S. speedskating trials in Milwaukee — a stunning result for the world's top-ranked skater in the event — Bowe knew what she wanted to do.

As the winner of the 500 at the U.S. trials, Bowe and second-place finisher Kimi Goetz claimed the two spots for Beijing. Jackson was third and the only way she would make the team in her specialty was if Bowe or Goetz gave up their spot.

US Speedskating rules didn’t allow for Jackson to have a re-skate — only a mechanical failure or a fall are reason for a do-over.

Before leaving the Pettit National Ice Center on Friday, Bowe walked up to Jackson, hugged her and assured her good friend that if she had anything to do with it, Jackson would be joining her in Beijing.

Bowe received a text message from US Speedskating officials telling her to be at the oval Sunday for the official team selection and Champagne celebration.

“I didn’t want to have this moment without Erin out there. I called her late this morning and said that I wanted to officially give her her spot,” Bowe said. “In my heart, there was never a question.”

In November in Poland, Jackson became the first Black woman to win a World Cup event. She won four of eight 500 races on the World Cup circuit, along with a second and third.

“She has earned her spot,” Bowe said. “Erin is absolutely on top of her game now.”

Bowe's gesture capped what Jackson called a “crazy few days.” She didn't sleep that night after her slip.

“I couldn't turn my brain off,” Jackson said. “It’s been really stressful, being in limbo for so long and just disappointed because I was really excited to show a good race.”

Bowe and Jackson are from the same hometown of Ocala, Florida, where they each started out inline skating along with three-time Olympian Joey Mantia. At 33, Bowe is four years older than Jackson.

“We have a photo of Erin standing between myself and Joey,” Bowe said, “and she comes up to maybe our chest. We go back very far.”

Bowe downplayed her generosity, saying, “This is bigger than just me. This is the Olympic Games and it’s about Team USA and giving everybody the opportunity to showcase what they got.”

There's still a chance Bowe could compete in the 500 in Beijing. Final quota allocations for the Olympics will be determined later this month and it's possible the U.S. could pick up a third spot in the sprint.

Jackson will be making her second Olympic appearance, having finished 24th in the 500 in 2018, not long after she switched from inline skating to the ice.