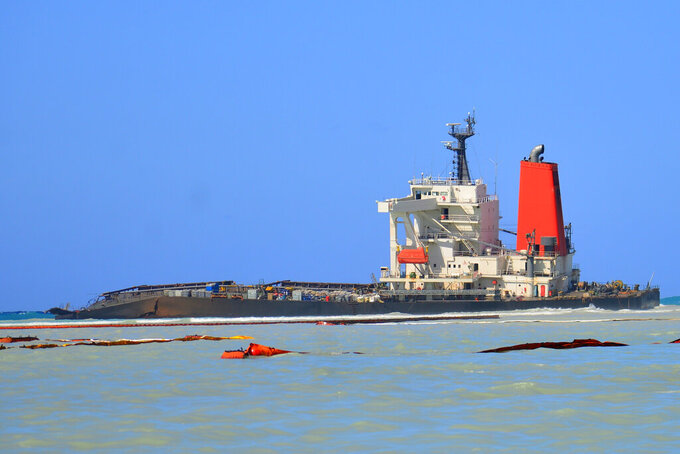 FILE — In this Sunday, Aug. 16 file photo the Japanese MV Wakashio, a bulk carrier ship that recently ran aground off the southeast coast of Mauritius, can be seen from the coast of Mauritius. The oil spill disaster turned deadly this week when a tugboat leaving the shipwreck collided with a barge and sank, killing at least three sailors, police said Tuesday Sept. 1, 2020. (AP Photo/ Sumeet Mudhoo-L'express Maurice/File)

TOKYO (AP) — The Japanese operator of a bulk carrier that struck a coral reef and caused a widespread oil spill off the coast of Mauritius said Friday it will provide 1 billion yen ($9 million) to fund environmental projects and support the local fishing community.

The environmental disaster began on July 25 when the ship MV Wakashio strayed off course and struck a coral reef a mile offshore. After being pounded by heavy surf for nearly two weeks, the ship’s hull cracked and on Aug. 6 it began leaking fuel into a lagoon, polluting a protected wetlands area and a bird and wildlife sanctuary.

MOL President Junichiro Ikeda apologized for the damage and said the financial contribution reflects the company’s commitment to fulfill its social responsibility.

The ship owner, Nagashiki Shipping, is also joining the fund, MOL said. Mauritius has said it is seeking compensation for the damage from Nagashiki.

More than 1,000 tons of oil spilled into the coastal waters. About 3,000 tons that remained on the ship was pumped into barges before the Wakashio broke in two several days later.

Thousands of civilian volunteers worked for days to try to minimize the damage from the oil spill, while environmental workers ferried baby tortoises and rare plants to shore and plucked trapped seabirds out of the goo.

Residents and environmentalists have demanded an investigations into why the ship strayed so far off course. Its captain and first officer have been arrested and charged with endangering safe navigation.

Earlier this week, the maritime authority of Panama, where the ship is registered, issued a statement saying an early investigation suggested the accident was caused by human error, including a mishandling of a nautical chart and navigation system and lack of supervision and safety monitoring.

It also said the ship's captain had ordered a change of course to go five miles closer to shore than planned so they could get cellphone signals and crew members could talk to their families.

Mauritius depends heavily on tourism, and the spill has been a severe blow on top of the effects of the coronavirus pandemic, which has limited international travel.

Tens of thousands of people recently protested in Mauritius over the government’s slow response to the oil spill and the discovery of dozens of dead dolphins. Another protest is planned Saturday.

It’s not yet clear what killed the dolphins. The government said no oil was found in two necropsies so far and called the deaths a “sad coincidence.” Some experts fear water soluble chemicals in the fuel are to blame.