Japan, US to share China worry as ministers meet in Tokyo 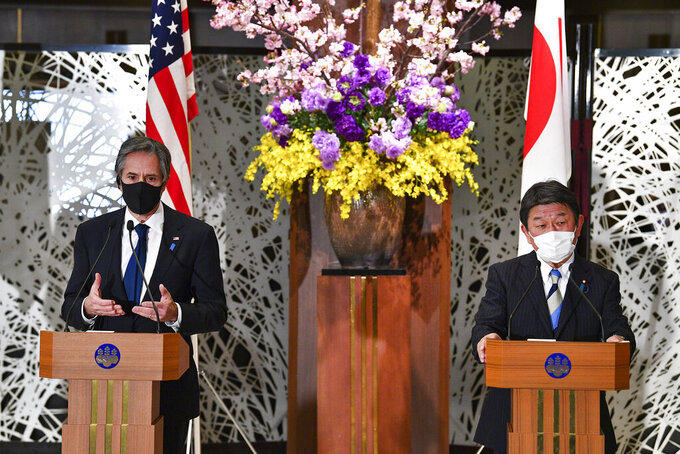 U.S. Secretary of State Antony Blinken, left, and Japan's Foreign Minister Toshimitsu Motegi, right, attend a joint news conference after their two plus two security talks at Iikura Guest House in Tokyo Tuesday, March 16, 2021. Defense and foreign ministers from the U.S. and Japan are meeting to discuss their concern over China's growing influence in the Indo-Pacific region as the Biden administration tries to reaffirm engagement with its key regional allies.(Kazuhiro Nogi/Pool Photo via AP)

Aside from the sharp rhetoric aimed at Beijing, the meeting in Tokyo and a planned stop next in Seoul are as much an effort by the Biden administration to reassure worried allies in Asia after four years of occasionally confrontational dealings with the Trump administration.

U.S. Secretary of State Antony Blinken, after holding the so-called “two plus two” security talks with Defense Secretary Lloyd Austin and their Japanese counterparts —Foreign Minister Toshimitsu Motegi and Defense Minister Nobuo Kishi — said democracy and human rights in the region are being challenged and the United States will push with its partners for a free and open Indo-Pacific.

Blinken said the Biden administration is committed to work with U.S. allies and those in the region as they face challenges from China and its ally North Korea, which is pursuing an illicit nuclear weapons program.

“We will push back if necessary, when China uses coercion or aggression to get its way,” he said.

In a joint statement released after the talks, the ministers shared strong worry over Beijing’s human rights violations in Xinjiang, “unlawful maritime claims and activities in the South China Sea” and “unilateral action that seeks to change the status quo” over the Japan-controlled East China Sea islands that China also claims. The statement also stressed the importance of “peace and stability” in the Taiwan Strait.

On the Biden administration’s first Cabinet-level trip abroad, Blinken and Austin also agreed with their Japanese counterparts to cooperate on the coronavirus pandemic and climate change, as well as the nuclear threat posed by North Korea and the situation in Myanmar after its military coup.

On Tuesday, a day after the two U.S. officials arrived, North Korean leader Kim Jong Un's powerful sister warned the U.S. to “refrain from causing a stink” if it wants to “sleep in peace” for the next four years. She also criticized the U.S. and South Korea for holding military exercises.

Biden's decision to send key ministers to Japan as their first overseas visit — rather than hosting Japanese officials in Washington — means a lot for Japan, which considers its alliance with the United States the cornerstone of its diplomatic and security policies.

Blinken, in his opening remarks at an earlier meeting with Motegi, said “it is no accident that we chose Japan for the first Cabinet-level overseas travel" of the Biden administration, and that he and Austin are “here to reaffirm our commitment to the alliance and to build on it.”

He said the United States and its allies are working on together on climate change, cyber security and health security “in support of our shared values.”

Blinken also said that the United States and Japan reaffirmed the importance of their three-way partnership with South Korea, though the ministers did not publicly mention the strained relations between Tokyo and Seoul over wartime compensation issues.

South Korea and Japan have been struggling to repair relations that sank in 2019 following South Korean court rulings that ordered Japanese companies to pay reparations for forced labor during World War II. Those rulings led to trade curbs by both countries and Seoul threatened to scrap a bilateral military intelligence-sharing agreement that was a major symbol of the countries’ three-way security cooperation in the region.

Since then, Japan and U.S. have changed leaders, leaving hope for improved relations.

Austin referenced “China’s destabilizing actions" and said it was a “a pacing challenge” for his department. He said the allies need to develop operational capability to respond quickly to a security threat like China.

"We know that competing in today’s shifting global dynamics, can only be done through the spirit of teamwork and cooperation, which are the hallmarks of our alliance with Japan,” he said.

Kishi said Japan, which has increasingly worked side-by-side with the U.S. military, will bolster extended deterrence and readiness across domains including space and cybersecurity by deepening coordination and aligning security policies.

Japan’s constitution prohibits the use of force in settling international disputes, and any attempt to increase its military capability is a sensitive issue in Asia.

Japan is also in a delicate diplomatic situation because its economy, like those of other countries in the region, heavily depends on China.

But Tokyo considers China’s escalating maritime activity in the region a security threat. Beijing has built manmade islands in the South China Sea and equipped them with military equipment and is pressing its claim to virtually all of the sea’s key fisheries and waterways. Japan opposes China’s claim to the Japanese-controlled Senkaku Islands, called Diaoyu in China, in the East China Sea and its increased activity in the disputed area.

China has denied it is expansionist and has said it is only defending its territorial rights.

“The U.S. and Japan should engage in exchanges and cooperation that will help enhance mutual understanding and mutual trust among regional countries, contribute to solidarity and cooperation, as well as peace and stability in the Asia-Pacific region,” Zhao said at a daily briefing.

Later Tuesday, the American officials met with Japanese Prime Minister Yoshihide Suga, who is expected to visit Washington sometime in the first half of April to meet with Biden in person — becoming the first foreign leader to do so since Biden became president in January.

In a move meant to signal his intention for the U.S. to more strongly engage with the Asia-Pacific region, Biden on Friday held a first virtual summit of the leaders from Australia, Japan, India and the United States, a grouping known as the “Quad,” and emphasized Washington’s commitment to the region.

Blinken and Austin on Wednesday will head to South Korea, with the focus of those talks being North Korea and its nuclear ambitions.

Blinken will meet senior Chinese officials in Anchorage, Alaska, on his way back to Washington. Austin will go from Seoul to New Delhi for meetings with Indian leaders.