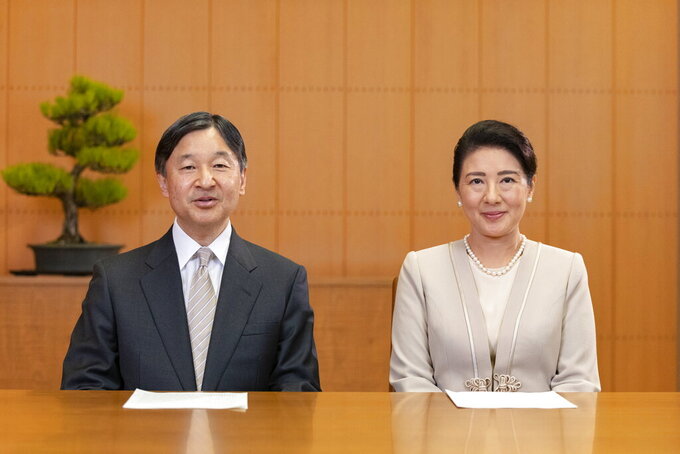 TOKYO (AP) — Japan's Emperor Naruhito expressed gratitude to medical professionals and acknowledged the hardship caused by the coronavirus in a New Year's Day message shared by video instead of the usual public speech in front of large crowds at the palace.

The emperor and his wife Empress Masako sat side by side, next to a sculpted bonsai plant in the video.

Naruhito expressed his “deep respect and gratitude” to doctors and nurses treating COVID-19 patients and offered empathy to those who lost loved ones, lost their jobs or were struggling with loneliness.

“Over this past year, we have all faced many problems and hardships over the spread of this unknown coronavirus that for most of us living in this age have never experienced on such a scale,” he said.

He also said he was worried about the discrimination suffered by those who had been sick or worked in the medical field, a phenomenon widespread in conformist Japan.

“I look forward with all my heart to be able to meet with all of you again, face to face,” he said, after offering his prayers for world peace.

Japan has had more than 3,000 deaths from COVID-19. Worries are growing about another surge in cases, reaching a daily record of 1,337 new infections for the capital Tokyo on Thursday.

The Imperial Palace in central Tokyo opens to the public each New Year's Day and crowds on the grounds cheer the imperial family's appearance.

The Imperial Household Agency said last month a video message will be released instead because of the pandemic. The bigger anticipation in Japan had turned to whether Masako would appear. She has tended to be reclusive, suffering what has been described as a stress-related condition, but has appeared in more public events in recent years.

Masako said “Happy New Year,” at the start of the message and spoke for the last 30 seconds of the nearly seven-minute message. Her beige suit matched the color of Naruhito’s tie.

“I am praying from the bottom of my heart that this year will be as gentle a year as possible for all of you. This winter has been harsh with heavy snow in some areas earlier than usual, and so please everyone do stay healthy,” Masako said.

The video message was Naruhito's first. His father Emperor Emeritus Akihito did two, after the tsunami disaster in northeastern Japan in 2011 and when he announced his abdication in 2016.

The emperor does not have political power in Japan but holds symbolic significance for many people. Even Naruhito’s grandfather, Hirohito, the wartime emperor, was seen as a gentle man who loved nature in postwar years.